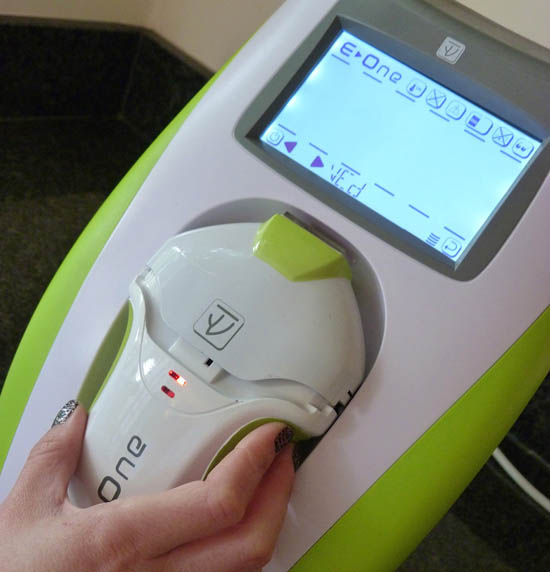 Between the Clarisonic Mia and the E>One at-home IPL machine - and McGuyver's fake tan back applicator, of course - it's been a gadgety couple of months Chez Moi. Today's (lengthy) update relates to the eye-wateringly expensive E>One, €1,499, which I've been loaned to trial and review for your depilation edification and have now had three sessions with. (My initial impressions of the system are here.)

Am I now hair-free and silky smooth and getting my legs out all over London?

Well, I'm not there yet but I think I'm definitely getting there.

After my first use, I could see that my underarm regrowth was slower and more patchy. It took a second go of zapping before I could be totally sure that something similar was happening on my legs, but for weeks after that second session I was getting several days at a time out of a single shave.

This was a huge - and very encouraging - change. To give you some idea of what a how dark and heavy my hair growth was previously, if I wanted to wear a dress or skirt in the summer, I'd have to get up ten minutes early and shave that morning. If I shaved the night before, there'd be an obvious five o'clock shadow on my legs by lunchtime.

I've now worked my way up to the highest intensity setting and while I can definitely feel something on my skin when I press the trigger to deploy the hair-zapping flash, it's a very bearable sensation. I couldn't honestly describe it as painful or even particularly uncomfortable: there's a warmth on the skin being treated as the bulb goes off but that's it. It's certainly not as sore for me as using an epilator on my underarms, or getting my legs waxed after a few months of sneaky shaving, or having my upper lip threaded. My pre-zap worry about how much a higher intensity is going to hurt has always been far worse than the reality.

It's not just me who thinks it's pretty pain-free: in addition to de-hairifying my own bits, I've been zapping a small patch of rogue hair on Himself's back. His exact words: "Is that it?!" Apparently it was much less painful than getting it waxed (and not just waxed by me, I mean. Less painful even than a pro waxer.)

It hasn't all been plain sailing, and although I know an average of ten sessions are needed to achieve permanent hair reduction, I've been disheartened with the mixed results I've seen so far on areas other than my underarms and legs. The "treasure trail" (shout out to reader Acat for coining that brilliant term!) on my stomach and chest is responding well, but my hobbit feet and knuckles seem to be particularly resilient to treatment. I think I can see fewer dark hairs on my upper lip, which is obviously good, but having to shave it in between sessions makes me feel like a bloke.

It was kind of weirdly fun the first time, though.

Some of the things that put me off about the E>One initially are still bugbears. The size of the handheld portion of the unit doesn't work too well with my hands, which are small but not unusually so, and it's also pretty heavy. My workaround is to take breaks during treatment sessions so this isn't necessarily a dealbreaker, it's just something to be aware of.

Other downsides are things that would really be true of any similar device. Although I'm a bit speedier now than I was on my first go, treating larger areas like the legs is a time intensive process. It's also pretty boring: you need to be committed and patient if you're going to do IPL at home. I've read other reviews about the E>One which have talked about being able to use this device and also watch a film or look at telly to help pass the time.

I can only conclude that these users have more than the usual number of eyes, because you really need to be looking at what you're doing so as not to miss a spot. I listen to comedy podcasts when I'm doing mine.

The bad thing about this machine is the price. You can read the case that manufacturers E>Swin make for the hefty price tag in my previous piece, but at €1,499 there's no getting away from the fact that the E>One is a seriously spendy bit of kit. It's not far off the cost of my last car, which is the benchmark by which I measure all big expenses.

In addition to that initial outlay, the optic cartridges that actually delivers the hair-stopping flash in units like these have a finite lifespan and need to be replaced when they run out. With the E>One, that lifespan's 3,000 flashes, and the manufacturers say you could expect to complete ten treatment sessions on two small areas (like the underarms) and get halfway through treating a larger area (like the lower legs.) Replacement optic cartridges cost  €109.

You could, of course, go in with a couple of mates and buy the E>One between a gang to make it more affordable; the flash head can be cleaned between users. I was thinking that it would be great if everyone could have their own dedicated optic cartridge in a scenario like this. No worries about someone using more than their fair share of the flashes! Unfortunately, the cartridges can't be switched in and out like that.

I've been agonising over whether the E>One is worth your hard earned. I do the same thing with every lipstick and nail varnish and face mask that I recommend, but this is in a slightly different league to a €3.59 bronzer. On balance, considering the costs associated with having a course of IPL treatments professionally administered and then the necessity for yearly or twice yearly top-ups, I reckon the case for going with an E>One is pretty compelling - but only if you have the time and inclination to DIY. Compared to cheaper at-home alternatives, it's quicker to use, delivers longer-lasting results, and fewer subsequent top-up sessions are required to maintain results.

The one I'm using is on loan, of course, but if I had €1,499 going spare (and didn't need to buy a small second-hand car), I would be very tempted to splash out on the E>One.

Lynnie’s E>One is being provided for trial by PR, she’s (sadly!) not getting to keep it once she’s done. E>One pack prices start at €1499 with the option to pay in four interest free installments following an initial deposit. Find out more on e-swin.ie