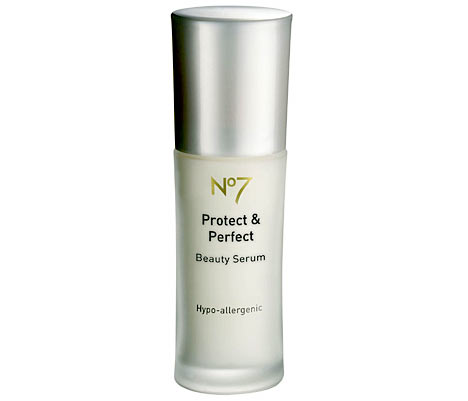 The premise of Prof Reagan's Beauty Parlor, a programme shown on BBC2 back in March, was to conduct investigations into beauty products using medical standards to see if they'd stand up to their claims. Now, in actual fact a cosmetic company can really say what they like about their product, even if it bears no actual resemblance to what the product does. And if you don't believe that - the proof is in the pudding. How many products have you bought that just did nothing they claimed to do?

So while Prof Reagan dismissed a lot of products as completely ineffective because of that, she also highlighted one in particular, and it's caused a consumer feeding frenzy.

Her recommendation that Boots' No7's relatively budget priced Protect and Perfect Serum was a serious contender in the anti-aging stakes sent scores of panicked women straight to their nearest stockist, and in the UK at least, the supplies ran out almost immediately. Consumer interest was such that counter staff were being bribed, and it was soon being flogged on eBay for vastly inflated prices. But it's finally back in stock now, and one is selling every eight seconds.

Boots stores in the UK braced themselves for the onslaught yesterday and four of their flagships even opened at 7am to deal with demand. With women queueing from 5.20am, that demand was certainly there. Two hours after Boots stores opened yesterday morning a staggering 20,000 bottles had sold in the UK, and a further 4,500 from www.boots.com. That's a lot of face cream.

And Boots have no intention of letting this one slide. Production has ramped up and they're now producing 24,000 bottles a day, with the precious bottles of serum rattling off the line at a rate of 1,000 bottles an hour. Production will continue at this rate for the foreseeable future in order to satisfy demand, so if you've missed out again, you won't have to wait long to rectify the situation.

But what I really want to know is this - have any of you guys used it, and if so, did you think it lived up to its (and Prof Reagan's) claims for it? Tell us in a comment!