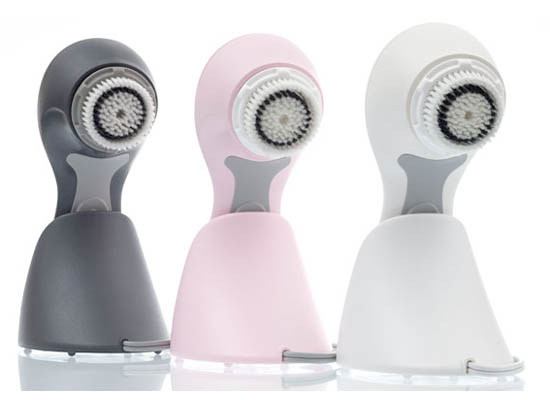 On a recent flying visit to New York, I decided to finally bite the bullet and treat myself to a Clarisonic. I've been reading glowing reviews about the handheld sonic facebrush in American magazines and blogs for the longest time and decided there was just nothing for it but to try the damn thing out for myself.

$149 and a very long 24 hours of continuous charging later, I was back home and giddy with excitement about using my new toy for the first time.

It's as easy to use as a toothbrush, and indeed it should be, since the head man behind the Clarisonic was one of the people who developed the sonic toothbrush. Press a button and the soft brush head spins into action, moving more than 300 times a second to - they say - remove make-up six times more effectively than traditional cleansing, clear pores, reduce the appearance of lines and wrinkles, and tackle oily areas, dry skin patches and blemishes.

You need to use a seperate cleanser for eyes and the brush head's a bit unwieldy so takes some getting used to, but those are just minor annoyances rather than massive gripes, and I like that it can be used with any cleanser. I'm using it nightly with my Eve Lom cleanser; I'm not sure if it's because I'm not using one of Clarisonic's own cleansers or because I'm doing something arseways, but I find I do need to give my face a quick swipe with a cloth afterwards to remove the cleanser residue from my skin and ensure my hairline's totally make-up free.

For the purposes of comparison, I should tell you that I've previously tried a non-motorised facebrush, which I found completely useless, and the Neutrogena Wave, which dried up my spots beautifully... but did the same to my skin and caused the skin around my nose to peel.

Now, I haven't even been using it a full week yet so I can't comment on how the Clarisonic performs long-term, but so far I've had no problems with sensitivity (I'm using the sensitive brush head for one minute a day at the moment) and honestly do think that my skin already looks improved.

Himself, who was very sceptical about it at the time of purchase and gave the sales assistant in Sephora a good grilling about its benefits, has since said that my skin looks "better" than before. When I asked him to elaborate, he hummed and hawwed for ages before telling me that my skin is "a better colour" and "looks cleaner".

Which I suspect probably roughly translates as improved skintone and less obvious pores, so I'll happily take it!

*Indicates an affiliate. When you buy through a starred link we receive a small percentage of of the sale.