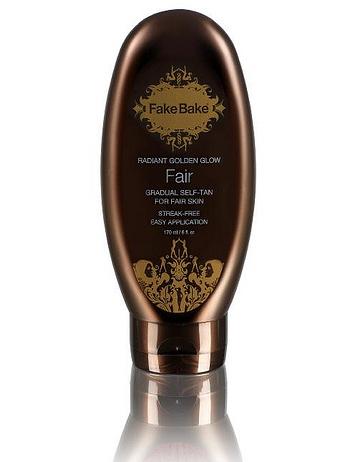 From your comments across the Blather and the recent posts about self tanners and suncare and the like, I gather that quite a few of yiz are partial to a bit of Fake Bake. You'll be interested to hear, then, that they're lepping on the gradual tanning bandwagon with their latest product.

Fake Bake Fair is aimed squarely at anyone with typical Northern European colouring who felt that the hue of the original products was a tad too deep for them. And unlike its other daily tanning counterparts, Fake Bake Fair is tinted so you can (a) see where you're lashing it on and (b) get a bit of instant colour even before it's started to develop.

Sounds fanfeckintastic to me, I have to say! Anyone tried it yet?