Fanny Facewash: removes makeup and dignity in one fell swoop 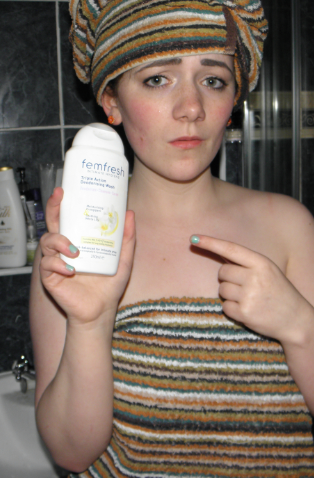 The other night, I found myself on the odd side of the internet again. It's exam time, so you can bet your bottom that I've spent most of my time doing anything but study. While putting the pro in procrastinating, I came across a beauty blogger who said that using intimate (wink, wink) wash on your face was really effective.

Immediately, I tweeted Aisling, laughing at the odd-balls who would rub foo foo wash into their faces and thinking she'd see the funny side. Well, here I am writing a post on it, does it look like she saw the funny side?

Essence of muff not included
The fact that it's a fanny cleanser is a bit off-putting, isn't it? I know it doesn't contain essence of muff, va-jay-jay extract or any of these ingredients but it just seems kinda yucky. It's upsetting the natural order of things, for god sake. Then I remembered the deodorant fights we used to have in school (nobody was asthmatic, it was grand) and thought, okay, if I can have armpit products on my face than I can totally have a feminine cleanser on it.

Fanny facial experiment
The principle is quite straightforward, they're supposed to balance PH levels - which are present in your skin too. Also, the ingredients in Femfresh, the cleanser I used, aren't too dissimilar to your run-of-the-mill face wash anyway. Realising that the proof would be in the pudding, I set about possibly the most embarrassing experiment that I'll ever conduct.

Slimy
Towel on, hot water running, I rubbed it on like I would my usual cleanser. Surprisingly, the world didn't suddenly end. In fact, it felt just like any other wash that I've ever used - until I got it in my mouth and screamed that it was slimy. After my photographer (older sister) replied that I was a slag and should be used to it, we resumed the cleansing process. 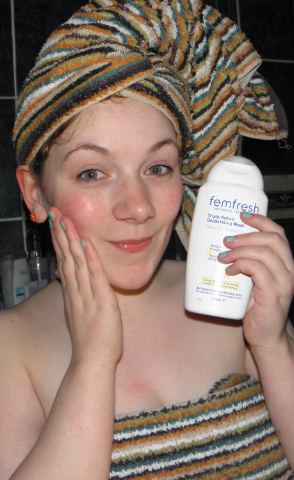 Removes both makeup and dignity
A quick look in the mirror showed that all make-up had been removed, even the hundred layers of mascara that I had on. Impressed? Very! Going to do a fanny facial again? Nope. I think there are too many other ways of scrubbing up without removing every ounce of dignity at the same time.