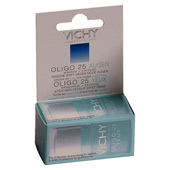 I was direly hungover yesterday, despite having promised myself that I wouldn't drink for a month, just to help the Curves regieme along. The second I arrived in the pub though, all resolve went right out the window. All my mates were boozing and I just felt so hard done by, so I told myself I'd just have a little couple. And I'd make them Corona's because the limes would be healthy and contain vitamins, don't you see.

Anyway, after about 45 little couple of drinks whilst enjoying a Richard Fearless DJ set (he made me drink, I tell you), I felt like unholy hell yesterday morning. UNHOLY HELL, just in case you didn't get it the first time. My eyes, they were bleary and sore, my face - it was like a grey old rag. The rest of me, we won't go into.

I had to do something about my eyes though, so I got out one of my recent purchases, a complete con of a product, Vichy's Oligo 25 Eyes. This chunky little fella is an anti-fatigue cooling effect stick. It contains manganese, escinine (no, me neither. Apparently it helps to stimulate drainage) and Vichy thermal spa water. It claims to reduce the appearance of under eye puffiness and dark circles. When I bought it, I thought "oh deadly! I can use this now when my eyes are tired and sore, it'll be like a great pick me up sort of thing", and handed over â‚¬12 for the pleasure. It wasn't till I got it home that I read the small print - you have to use it morning and night for 3 months. Well shag that, says I.

It only comes out during emergencies now, and if it does any good I can't see it. But it does have a nice cooling feeling immediately after you apply so I suppose it probably does reduce puffiness a bit.

But as Aphrodite says, there's one born every minute, and right now, she's typing at you, kid.