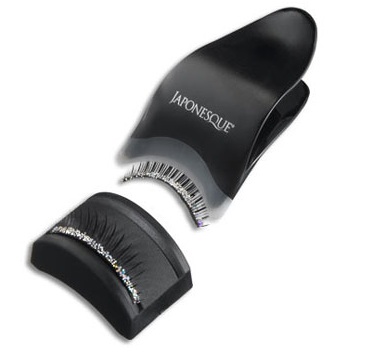 Japonesque beauty tools are some of the best around, and look at this clever little doofer - it's designed specially to help with the admittedly tricky placement of false lashes.

I'm grand with individuals cos I just lash them in there with a tweezers and a prayer, but I always feck up full strips, generally attaching one end to my lashes, and the other to body parts including variously, nose, cheeks and eyelids. But that's all over, because, I can now "forget the mess and acrobat-like contortions that used to accompany false lashes. With the Soft-Touch kit, perfect placement is one-touch easy", say HQhair. But but but - how does it work? The "applicator grips your false lashes with a silky soft tip that precisely follows every contour of your eyelid. Just apply eyelash adhesive to the band and gently press", apparently.