How NOT to choose foundation: a Masterclass from a Satsuma 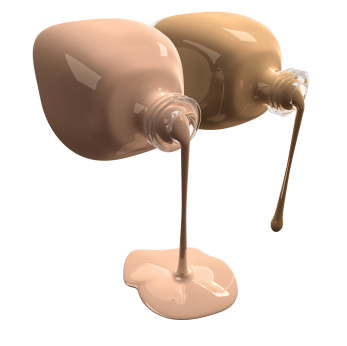 I hurried into Loots* and began to browse a makeup stand.

"Can I help you" came a voice at my shoulder.

"Yes" I replied "I need some Triple Flair foundation*  I think I'm a shade three, but I can't remember, it's been ages since I used this one.  But I need some extra coverage so I think I'll get it."

A five or a six?  I was taken aback.  Those colours were for people of a different racial origin and not for pasty pale types surely?

I turned to face The Voice fully.  And in one second I understood.

She was bright orange.  So heavily made up she looked older even though I reckoned she was in her early twenties.

"Bring your colour up with some darker powder." she insisted thrusting a compact at me in a shade akin to toffee.  "You're going to look like a ghost in that number three."

"But that's the colour I am," I quailed.

"Would I not use some bronzer?" I queried.

The horror! Luckily another customer demanded attention at this point.  I used the opportunity to seize a number three and hurry to the till.  I had paid for it and was scuttling out of the shop by the time the Satsuma spotted me.

"Did you get sorted?" she called after me.  I was in full retreat by this stage.

"Yes thank you," I replied wondering on what planet was she allowed to give such terrible advice to customers.  Sales Assistants: orange is NOT a good colour for anyone.  Match your foundation to your skin.  The end.

* All names have been changed.  I am morto for the brand in question.