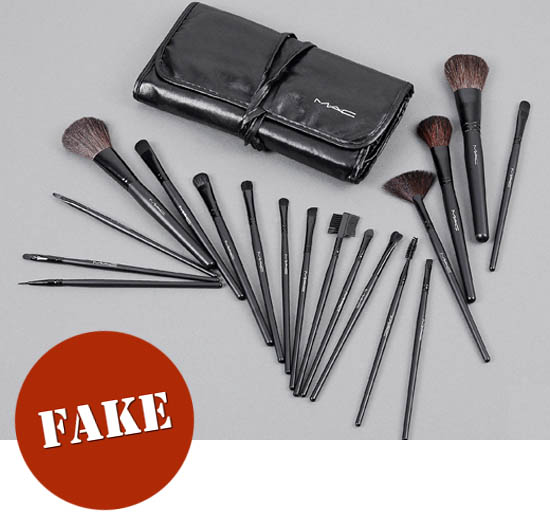 Just before Christmas, there was a bit of a kerfuffle about fake cosmetics being sold online. A few bloggers took the seller to task and, to our delight, the goods were removed. I got more than a few tweets from women, saying they never would have guessed that the products were knock-offs. It's understandable, the signs can be tricky to spot if unless you've spent every the last few years with your face inches from the make-up counter, like boring old me.

I've put together some of the things that I've learned in as concise a manner as possible, so you can avoid the trauma of parting with your hard earned cash (if you've been reading the Counter Culture posts, the you'll agree that hard earned is an understatement) for goods that aren't safe enough to pour down the toilet bowl.

Firstly, it's not uncommon that the text on the product will have spelling or grammatical errors. One blogger spotted a fake Mac "Watrproof" mascara for sale, much to our amusement. Not all mistakes are as obvious though - the font might also be blurry, crooked or not in line with the font used on the authentic products.

Another way you can tell if a product is fake just by looking is the colour. The best example of this are Mac brushes. The genuine brushes have a black handle that's shot through with a very muted glitter, a silver ferule and Mac written on them in sliver, just above the number of the brush. The hairs can be white, black, brown or a combination of white and black. Quite frequently, fakes deviate from this. As illustrated above, they might have matte black handles, black or gold ferules and hairs in a colour that aren't seen in the authentic collection - there's an abundance of mistakes that fakers make when it comes down to the exact hue of a product. 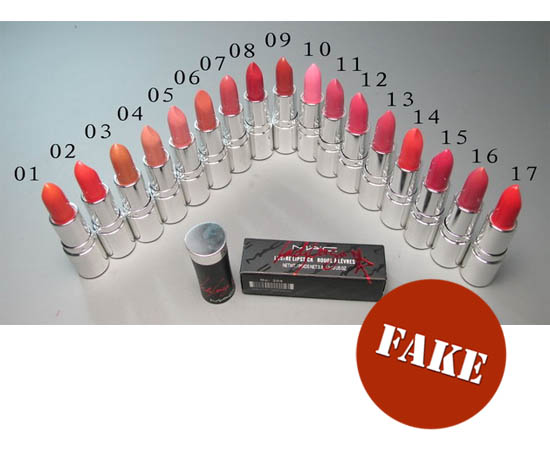 IS IT NAMED OR NUMBERED?

You should check the naming or numbering system of a brand you're buying from. Mac, for instance, give names to all of their colour cosmetics (blush, eye-shadow, lipstick etc.) but counterfeit products often just have numbers. It's not uncommon for the numbers to be displayed on little stickers or labels that don't suit the product. The lipsticks in the above photo are all numbered instead of named, as is the collection that they supposedly come from "003".

The packaging is a massive give-away. As mentioned above, you might notice something amiss in the colour or font used but the actual shape and size of the product can be indicative of its authenticity. Your best bet is to get the general gist of what a real product looks like, so you can compare your prospective purchase to it. I bought a tube of Touche Éclat and only knew that it was fake because I had previously owned one that I got straight from the counter. Everything about it was perfect - except the black tip. It was a touch slimmer and longer than it should have been. You've really got to get your reading glasses out for some items, but it's worth it to not get duped.

Most brands that produce brushes will do a few sets in cases as well as individual brushes. Counterfeit brushes usually come in sets of six or more and in big brush rolls, often made from cheap plastic - as you can see in the above picture. The poor quality of packaging is often very plain to see and should set alarm bells ringing. If in doubt, check the official website or go into a shop that stocks the brand and ask to see the product that you want to buy elsewhere. You should be able to get a close look at the real deal and, as a result, see the differences between that and the dodgy option.

I know I've prattled on about Mac a fair bit but they're the brand that, I think, suffers from counterfeiting the most - most likely because the brand is in such high demand. Though Mac rarely produce eye-shadow palettes with more than four shadows, eBay is flooded with mass produced rainbow palettes containing over a hundred small shadows that claim to be Mac. They aren't, at all.

Mac eye-shadows only come in palettes for limited edition collections. This means that they'll either be in the black square palette with the see-though lid and four shadows or in an ornate palette, generally with space for four or six shadows, that has the same branding as whichever collection it was a part of - for example Christmas 2010's A Tartan Tale or Christmas 2011's Glitter and Ice.

I used to think that the cost of a product would be a huge indicator of whether it was real or not. Sadly, this isn't the case. While most counterfeit goods will be sold cheaply, I've seen countless sets on eBay that are nearly as expensive as the genuine article. I wouldn't use cost as the only tool to spot fakes.

I generally don't buy products from anywhere other than the counters or reputable online stores. It's too much hassle to go making a PayPal claim, or arguing with an irate stall holder. If you're thinking of risking it, that even if the products aren't real - please don't. Kirstie has already posted about the risks of putting counterfeit products on your skin, how you have no idea what the proceeds are funding and all the other awful consequences that come with fakes.

If in doubt, I would ask somebody - the ladies on the Blather, the sales assistants in the store or a friend who is clued up. It's better to be safe then out of pocket and covered in hives!