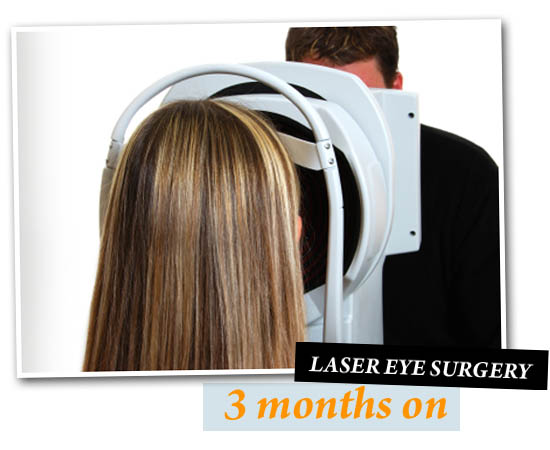 It's hard to believe, really, but it's now almost a full three months since I went under the laser to have my short-sightedness corrected. As I've previously mentioned, it wasn't a decision I took lightly, partly because of the expense involved and partly because, as plenty of well-meaning individuals reminded me on a near daily basis, you only get one set of eyes. A doctor friend won't consider having laser eye surgery on that basis and maintains that any kind of voluntary surgery creates unnecessary risk, but that's easy for her to say: she can rock a pair of glasses like no-one else I know.

Before I committed to going ahead with the surgery, one of the things I found most helpful was hearing real people's in-depth accounts of their experiences. Call me cynical, but I didn't place too much trust in advertorials, glowing (and effectively anonymous) testimonials on clinic websites, and ads featuring the likes of Fiona "I needn't have been so worried!" of Optilase fame.

With that in mind, I thought I'd share a few things that I only discovered after I'd had the surgery myself.

1. The surgery takes longer than you might expect
Every former laser eye surgery patient I talked to beforehand told me that "the whole thing was over in seconds", and while there's no doubt that it's quicker than a triple heart bypass I was still surprised by how long I was in the surgical suite. Okay, the laser which actually reshapes the cornea takes less than a minute per eye to do its thing, but I was still in there for just under 30 minutes.

2. It's not a pleasant sensation
While it's not what I would call painful - God bless anaesthetic eye drops - laser eye surgery is certainly not discomfort-free and parts of it gave me the willies, particularly because I could SEE WHAT WAS HAPPENING thanks to a shiny metal ring that encircled the bottom of the laser machine that my eye was directly beneath. (I recommend telling your surgeon if there's anything vaguely reflective looking in your field of vision as soon as you're horizontal on the table.)

I was initially grateful that the speculum used on me looked less A Clockwork Orange than I'd been expecting - it was just a innocuous-looking small plastic cylinder - but having something surrounding my eyeballs like that felt horrendously uncomfortable. For the time that the corneal flap was moved out of the way for the laser to zap my cornea, I couldn't see and that freaked me right out.

3. It makes you look like a druggie
My eyes were bloodshot for about three weeks after the surgery, and the one-time whites of my eyes looked yellow for about a week afterwards. It took several days for the very defined red ring around my iris to fade. I wasn't quite prepared for how badly bloodshot my eyes would be and couldn't bear to see them in the mirror for ages afterwards.

4. It has side-effects you mightn't anticipate
I've been really fortunate to have no serious side-effects - no dry eyes, no night vision problems, nothing like that. However, there are a couple of things about being short-sighted that I really miss. I can't, for example, see Himself in focus up close anymore, and not being able to see my underarms in focus when shaving to check that I haven't missed a patch is a pain in the hoop. Fiddly near-vision tasks definitely felt like less of a challenge before I had my eyes done.

People often say that having laser eye surgery changed their life, that it's the best thing they've ever done, the best money they ever spent, and that their only regret is not having had it done sooner.

I'm not quite there yet, if I'm perfectly honest.

My vision is now 20/16 in my right eye and 20/20 in my left, which sounds amazing; however in practice the fact that my sight is different in both eyes is actually very frustrating and I find myself closing my left eye to take advantage of the better vision in the right.

In addition, I'm not yet used to seeing myself everyday without my glasses and, on a beauty note, I really miss the way my frames used to hide pigmentation and the line running between the inner corner of my eyes and the tops of my cheeks!

Read more about glasses and laser: