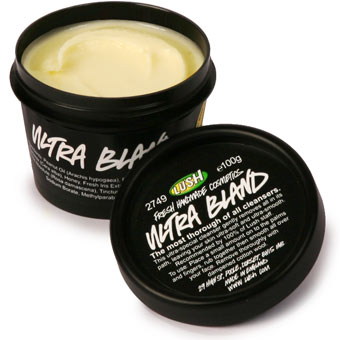 Well, I've finally scraped the verrrry last out of my big pot of Eve Lom cleanser. Bought nearly ten months ago in Space NK in Soho, New York, it had lasted me pretty feckin' well, but I was itching for a bit of a change and wanted to try a cheaper alternative. So last Thursday evening, I nipped into Lush on Henry Street and picked up a little 45g starter pot of Ultra Bland for €10.95 (€18.95 for 100g). Like Eve Lom's version, this is a semi-solid cleanser that melts in the hands to a far more liquid texture and is applied to a dry, fully made-up face and then removed with a wet muslin cloth.

That's sort of where the comparison ends, however. While the Eve Lom smells all fabulously aromatherapy-ish, with its clove and eucalyptus oil, and makes me close my eyes and inhale deeply and feel very pampered, Ultra Bland makes me hold my breath while using it - and then gag if I accidentally breathe in! It contains things that, by rights, should smell lurvely, like honey and rose oil, but none of that can disguise the lurking aroma of peanut butter, courtesy of Ultra Bland's main ingredient - peanut butter, er, oil. It also doesn't score particularly well on the make-up removal front, since it can't handle eye make-up at all: Ultra Bland made no impact at all on my eyeliner or mascara, which I'm rather annoyed about because an uber-chirpy Lush staff member had specifically assured me of its power in that regard. Bah.

Ah feck the recession - come back to me Eve!