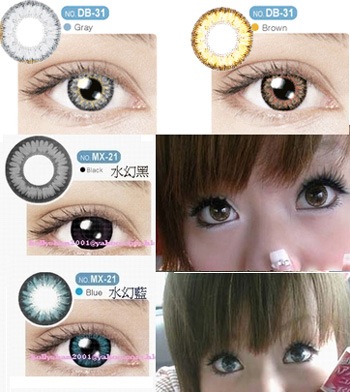 One of the girls that I work with is having laser eye surgery today; after himming and hawing about it for the last three years or so she finally decided that she just couldn't take the face furniture no more. Now, I'm going to stick with the good old contacts to get a spec-free look for the time being, but these anime-stylee lenses which I came across at girl gadget blog Shiny Shiny over the weekend are something that I won't be investing in anytime soon.

Manufactured primarily in Korea and a big hit in Japan (where else?), these are tinted contact lenses that bestow a super wide-eyed look upon their wearer because they're actually wider than standard lenses and are intensly pigmented along the outer iris ring to further increase the illusion.

Maybe it's me, but don't the girls in the pic up there look distinctly like they've had a run-in with Photoshop? And as for the cost of achieving this Manga/doe-eyed/Puss In Boots look - well, these lenses go for between $30-50 a pair.