Mushroom Nail Varnish: Hot for SS10, but why wait? 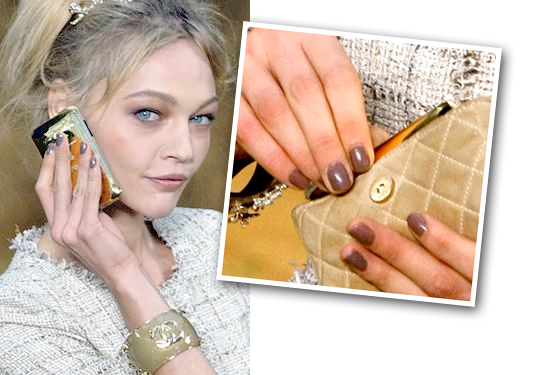 Nude nails can be really hard to get right, especially with typical Irish skin tones. So rather than trying every version of pink and peach imaginable and wearing a hole in your pocket in the process, why not veer towards colours with grey or even slightly purple undertones?

I'd pretty much given up on nudes until I chanced upon Orly's Country Club Khaki, which has been gracing my nails on and off now for the last few weeks. It's a taupe-y mushroom that Himself hates (he's not a fan of black, navy or green on nails either, which just goes to show that blokes haven't a flipping breeze about these things). And, unlike the pinky peachy nudes I've tried in the past, it doesn't give me dead fingers.

And what did I discover is Chanel's hottest new new nail colour for Spring 2010? Nope, not Jade - sooooo last week, dahlings - but a mushroom shade with mauve undertones. Also created by creative director Peter Philips, it's called Particulière and debuted at the recent SS10 Ready To Wear shows in Paris, where it was sported by Lily Allen as well as by the models. Expect to see it on counter in January.

Or not, given that it'll probably be sold out and subject to a big ol' waiting list if it even makes it to our shores...