If you're a beaut.ie regular, you'll know that I'm a veritable deeemon for the eyeliner. A cat-eye is a daily must for me, and I've written before about the ways that eyeliner can be used to alter eye shape, even out uneven eyes, and generally just make eyes look great.

I know my eyeliner (if I do say so myself!) and I've tried almost every liner available. My favourite liner - till now - was Maybelline's Eye Studio Lasting Drama Gel Liner. It met almost all of my liner demands.

What I want in a liner is pretty much what everyone wants - an opaque, truly black, matte formula which glides on easily and does. not. budge.

I currently use a pot of gel liner and a liner brush, but it does have some shortcomings. Firstly, potted gel liners dry out quite quickly. They don't travel awfully well - changes in temperature can mess with them quite easily, and the fact that you need to apply them with a brush means that you can't just pop it loose into your handbag if you wanted to. 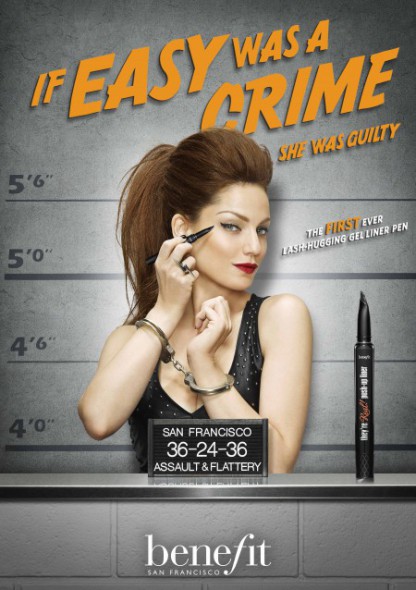 The single biggest issue with gel liner - in fact, with all liner - is that it's bloody hard to apply. I trained as a makeup artist - I SHOULD be able to bang on a perfect line in a couple of minutes. A lot of women love a dramatic flick, but just despair at how difficult it can be to apply.

When I first heard about Benefit's new Push-Up Liner, I was utterly sceptical. We've seen so many faddy liners over the years which promise makeup enthusiasts of all levels the flick they so covet. And it has always been nonsense.

Until now. Don't get me wrong - you need to be able to draw a straight line to achieve a cat eye flick. However, this liner is the single best formulation and easiest application tool I have ever encountered. Ever.

It's even endorsed by the completely dreamy Lisa Eldridge - the Nigella of makeup - who is known for her integrity. So you know it's good.

This liner is basically a gel in a pen which won't harden as a pot of liner would as it isn't exposed to the air. It has a flat, pointed tip that genuinely does push the liner right down into the lashline, avoiding that ugly bald white line between your liner and your lashes. It is a rich, matte black which glides on from the rubber applicator.

The applicator itself is flat, so you can literally lean and press it along the lashline,  meaning that you don't risk a wobbly wrist making errors. The tip of the flat applicator is pointed, making it far easier to create a flick!

You can see for yourself in the photos that the colour payoff is excellent. To push the formulation up into the applicator, you simply rotate the bottom of the pen once until it clicks. One click is enough to line the whole eye. If you apply more, the excess might crack throughout the day.

Applied correctly, however, this liner does not move. At all. The unfortunate consequence of that is that it can be quite difficult to remove (like its sister product, They're Real Mascara). That's why Benefit have released an eye makeup remover which they promise will remove all They're Real products without a fuss. It works. If you don't want to shell out for 'special' eye makeup remover, you can loosen eye makeup with a cotton pad soaked in olive oil, then cleanse as normal. Job done! 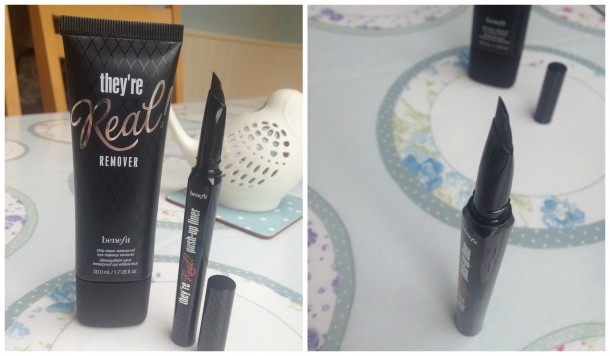 They're Real Push-Up Liner and Eye Makeup Remover will be available from June 28th. The Remover will be priced at €19.50, and the liner - a new permanent addition to my makeup bag!- will be €25.

Do you covet a cat-eye flick, and will you be giving this a go?