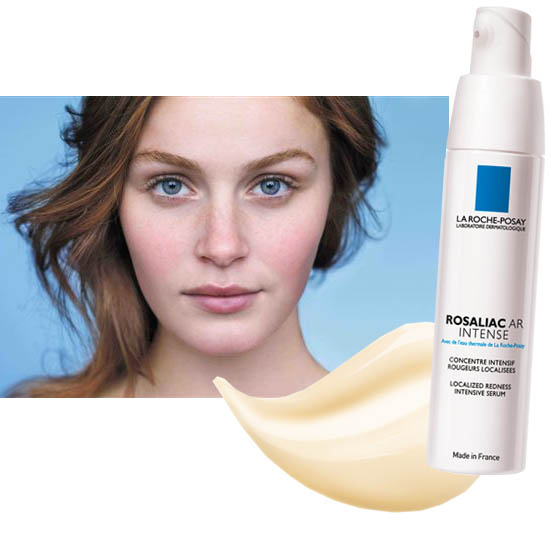 There are some interesting statistics in the press release for La Roche-Posay's new Rosaliac AR Intense. Apparently, 80% of people presenting the clinical signs of rosacea don't know that's what they have. Those signs are transitory or permanent redness, small dilated vessels or spots, and/or inflammation across the nose, cheeks or forehead, and in more extreme cases sufferers are afflicted by hot flushes and stinging or burning sensations.

The whole Rosaliac range is formulated specifically for sensitive, redness-prone skin, and the new Rosaliac AR Intense is an intensive localised anti-redness treatment to absorb redness at its source and prevent its reappearance. It contains the active ingredient Ambophenol which is derived from the Tambourissa Trichophylla plant, used by the locals in Madagascar to make sedative and pain-relieving infusions.

Ambophenol works in three ways to deal with redness by improving micro-circulation and strengthening blood vessel walls, protecting cells against free radicals, and inhibiting the production of the peptides that are involved in the development of redness in the first place.

In addition to reducing the development and intensity of redness and small blood vessels near the skin's surface while you're actually using it, Rosaliac AR Intense has proven anti-relapse efficacy so that it continues to be effective against redness for a week after ceasing use.

As a treatment, this stuff goes on over moisturiser and under make-up and while it's not quite as foundation primer-alike as La Roche-Posay Cicaplast, it's got a light gel make-up friendly texture and dries to a velvet smooth finish that seems to really agree with my liquid foundation and hasn't clogged my pores.

Rosaliac AR Intense costs €23.50 and is available in pharmacies now.

3 face washes for clean and clear skin this winter

3 of the best exfoliators to suit sensitive skin types

3 ways to remove your makeup when you're in a rush

This is the pharmacy face wash that keeps breakouts at bay