Scented Candles: Why Are You Such a Pain in the Arse? 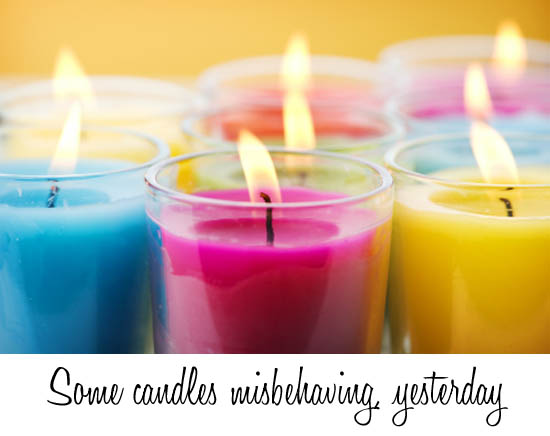 I love scented candles. I really do. Truly, madly, deeply.

I read so much stuff about natural vegetable-based or soy wax being far superior to anything petroleum-based - and in terms of not wrecking your ceiling so badly with smudgy smoke marks then yeah, the more natural wax variety does burn cleaner. It also burns completely irregularly, which candle makers conveniently 'forget' to mention. A mix is probably the compromise but you can't always guarantee an even burn no matter what - other factors come into play like the room temperature, evenness of the surface you place them on and drafts, for example.

I have thrown out far too many incredibly expensive candles in beautiful glass jars because they sank a hole in themselves after an hour under flame and could never be lit again. It's such a frigging waste.

So I became incandescent with candle-based fury recently when yet another divine-smelling Cowshed offering looked like it was about to take early retirement. "OH NO, oh NO NO NO NO NO you effing don't," I thought in a massive temper, and got it while the flame was still pathetically sputtering and the wax was fluid.

This is evidently the trick: it had a completely liquid centre and solid sides but they were malleable enough that I could get a teaspoon and smush it all down into some semblance of flatness, with a bit of wick poking out. I didn't hold out much hope, left it to cool and tried lighting it again the next night.

And whaddya know? It worked - but constant vigilance was needed. Each time I lit the bloody thing I had to perform essential teaspoon-based maintenance. But I got that mother to burn to the last tiny dregs. That scented fecker was forced to light and melt right to the last five millimeters. VICTORY WAS MINE.

Hey - it might not sound like much. But ladies, it's one small step for woman, one giant leap for beautykind.