Sort your tan in a jiffy with Benefit 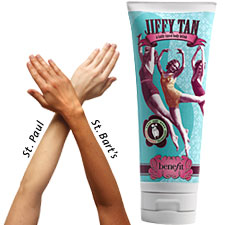 As many of you will know, courtesy of my very publicly feeling sorry for myself online last week, I've been a bit poorly for the last little while, struck down by an evil bout of acute sinusitis. Oooh. It even sounds menacing, doesn't it? Anywho, an unfortunate upshot of this was that I had done zero preparing for the big Saturday night Evint that was the Irish Blog Awards '09 - as of 1am on Saturday morning, I'd no idea what the feck I would wear and, even worse for a girl reprezentin' Beaut.ie, I'd no tan done. Eek!

Thankfully for me and my near glow-in-the-dark lilywhite arms and chest, Benefit's Jiffy Tan is a Godsend in such situations. It's a tinted instant tan and, unlike some other such products, is nice and light in texture and goes on easily and evenly without streaks. Once you let it dry for 10 minutes before dressing, Jiffy Tan also stays firmly put until you wash it off with soap and water - I tried to take it off with water alone to see if it'd stand up to a soft Irish summer's day complete with lashings of rain and there was no budge on the stuff.

Oh, and it's non-stinky, so there's none of that awfulness of waking up the morning after the collapsed-into-bed-at-4.30am-with-a-full-face-of-slap-on night before to the stomach churning smell of fake tan!