Stretch marks in pregnancy - can they be prevented? Xgirl got pregnant just to find out!

I've been familiar with stretch marks since my teenage years, when puberty and its associated growth spurts left a series of the silvery lines across my hips and thighs. So I was expecting more to show up during pregnancy, though the fact that the few I got first time around waited until week 37 to show up resulted in my going to bed in floods of hormonal tears, as I'd thought I might get away without them by then. 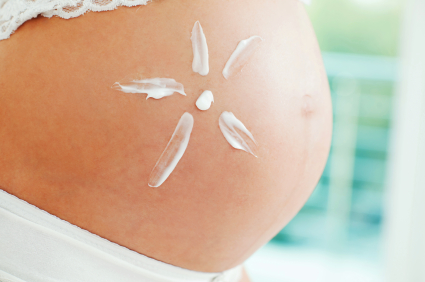 Formed when the skin is stretched suddenly as a result of weight gain, pregnancy or growth spurts, stretch marks are tears in the dermis (the middle layer of the skin) which allow deeper layers of the skin to show through. They usually start out looking red or purple and eventually fade to a silvery white colour.

When it comes to stretch marks formed as a result of pregnancy, the sad news is that hormones play a factor in addition to growth and while some women are lucky enough to avoid them altogether, others will develop them no matter what they do to try to avoid them.

Moisturizing the skin regularly with oils, lotions or butters (I liked plant-based oils but the reality is that anything hydrating is good enough) is a good start and really helps anyway during pregnancy when skin stretched tight over a growing bump starts to feel dry, uncomfortable and maddeningly itchy. But no matter how much oil you use and how often you apply it, the unfortunate truth is that stretch marks can't really be prevented.

The good news is that stretch marks that appear during pregnancy often fade and become much less obvious once your body goes back to normal after giving birth. I know the ones I developed during my first pregnancy were practically invisible once I'd slimmed down again and though I developed a lot more second time around, those are also not anywhere near as obvious as they were while I was pregnant.

Which is just as well, because the reality is that there is no oil, lotion or cream that can remove stretchmarks once they appear. Some skincare treatments, such as glycolic acid, vitamin C and retinoids can have results when used in the early stages of stretchmark formation (though retinoids can't be used while pregnant or breastfeeding). And if you want to go further, laser treatments can improve their appearance to a certain extent, though even these won't remove them totally.

What I have been trying is rosehip oil. Even knowing that it won't remove stretchmarks, I have found that applying it regularly greatly improves the look of my skin and as a result diminishes the effect of the stretchmarks. I haven't really been committed enough to use it consistently, but Trilogy did commission an independent clinical study of the effects of their rosehip oil on stretchmarks which showed good results after a period of 12 weeks, so if I ever get around to testing it properly for that length of time I'll let you know how I get on.

If you've used and liked any products claiming to treat stretchmarks, did you have good results? Let us know in the comments!

Adult Acne is on the rise. Professional Treatment of Spot & Blemish Prone Skin