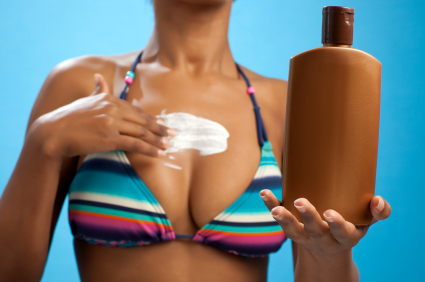 As if there wasn't enough for new mothers to worry about eh?  The amount of conflicting research out there makes it virtually impossible to know what's best to do.  For years expectant mothers have kept off the booze, restricting themselves to maybe one glass on a special occasion, because they were following well established research.  Then a new study found recently that it was actually ok to drink moderately while pregnant.

The issue of whether to breast feed or not is particularly fraught with controversy, guilt tripping and argument anyway - and now a new study has found that traces of UV sunscreen, along with some parabens and musk (possibly derived from perfume) can  make their way into breast milk.

Researchers in the University of Zurich tested breast milk to see if they could find traces of cosmetics- and they found  that "a new class of pollutants can be found in human breast milk, alongside the very fat, soluble, persistent organic pollutants (POPs) (toxic organic compounds that remain intact for long periods of time in the environment and accumulate in the fatty tissue of living organisms)."  Read more here

But what does this actually mean? They don't really know.  These substances are known disrupters of the endocrine system but it's not clear how they would work here.    And does it harm the baby?  Well they don't know that either.  Sure babies are slathered in high factor every time a ray of sun hits them.

So new mothers: now you know.  Sort of.  Do nothing to make yourselves look attractive.  Keep away from cosmetics - and don't dare protect yourselves from the sun.