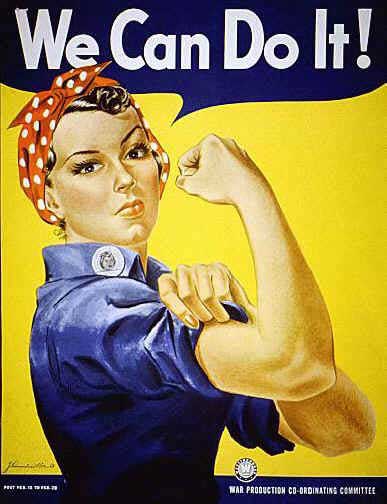 Now if you think you're less spendthrift than you used to be (due to the recession and all like) then you probably feel that you're doing your best to:

But I'm telling you we've got NOTHING on the ladies of wartime. Not only would you be terrified of the obvious things like (a) being killed (b) everyone you loved being killed (c) the total destruction of civilization as you knew it (d) Hitler invading etc; you'd also be worried about looking dreadful while it was all happening.

Because women weren't allowed to let themselves go during WW2. Oh no. Part of the whole British stiff upper lip thing was also looking good - literally putting a brave face on things. And if a handsome GI with a carload of nylons was the only man to be cheered up by your wartime glamour... well a girl needs some fun in her life doesn't she?

How do you think you would have coped?

The one book every beauty lover needs on their bedside locker

Sleep on it: The 1950s lady's trick for preserving that perfect hairdo

Modern conundrum: should I Wax my Hoo Haa? Or is it ok to have a Furry Gee Like Harry Potter Says?

Couples: a new and exciting way to revive your relationship! Have plastic surgery together

YSL Touche Eclat: still worth it? Is Reverse Panda EVER worth it?