Is This the Worst Break Up of All Time?

Further proof, as if it was needed, that the world is full of very strange people.

Breaking up is hard to do, as the old song goes, and it involves a lot of tact and an ability to express yourself in such a way that both parties walk away feeling as good as could be expected and no one is left an emotional wreck, crying uncontrollably with snot running from their nose.

For one particular man (who was not named) he decided that he would pretty much break all those rules by sending an incredible text (the first indicator of bad form) that detailed the many reasons why they decided to bring an end to their seven-week-long relationship in the form of a list, with number three being a particular highlight. 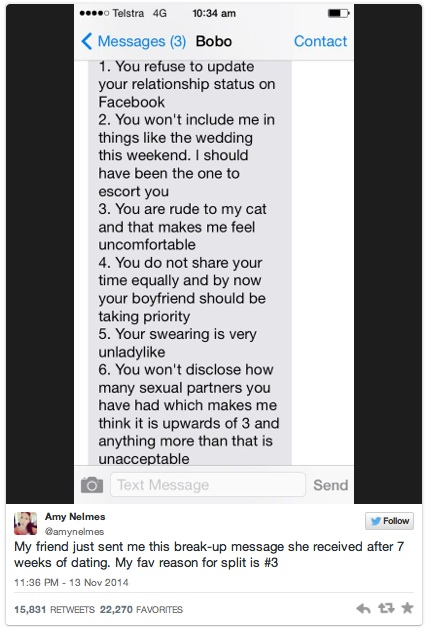 The text was shared by Amy Nelmes, editor at The Fix, whose friend received it. Something tells us that she's better off without him…and since when did teenage break ups get left int he ha'penny place by heartbroken adults?

Have you ever broken up with someone by text or has someone ever broken up you via electronic ding? Or what's the worst break up story you can share with the class?