Ah Jaysis Mick Wallis, Ming! The bleeding state of you. This house calls for style rules to be implemented in the Dail IMMEDIATELY

Taking a break from our happy Christmas scheduling we must interrupt this program to TALK ABOUT MICK WALLACE.  Again!

We've already offered de-frizzing solutions for the manky mop that adorns his head - but he's ignored them.  Never mind, we will persevere. 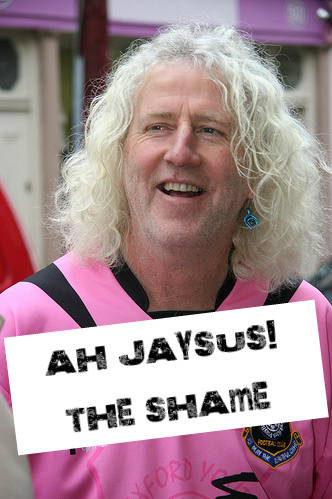 No one is going to argue that the state of the nation is perhaps consumed with matters of graver importance at the moment.  Another austerity budget is on the way and the whole tragic Savita case has been so dreadfully mishandled by the government that one more bad judgement call could bring them down.

So that's why Miriam Lord's column in the Irish Times last week had me in stitches - God how we needed that light relief.   Speaking of the sartorial style (or lack of it) with regards to Mick Wallace and Ming Flanagan, Miriam cut straight to the chase and left no room for dissent.  Even the backbenchers ALL seemed to be in agreement with this one.

Ming wore a bright orange gansy to the highest chamber of office ALL WEEK (rumour flew that he had to be surgically cut out of it by the fire brigade at the weekend) but it was Mr Wallace who"really took the biscuit".  Wearing "some class of an aul blouse", open to the er navel (PUKE) to reveal an unwelcome sight of curly grey chest hair, no one knew where to look.

"It's a man's right to choose" Miriam overheard a TD say "but I still don't agree with it".

And neither do I!  Imagine Sarkozy putting up with that shit?  In the French government if they're not on the treadmill every day and suited and booted to impeccable standards, professional and groomed, showing  pride in their nation, they're out.

So why are we putting up with this?  Is it actually okay for our TDs to turn up for work like this? Or is it the ultimate disrespect?  Have your say!