Beaut.ie How To: Remove that glittery Christmas nail polish 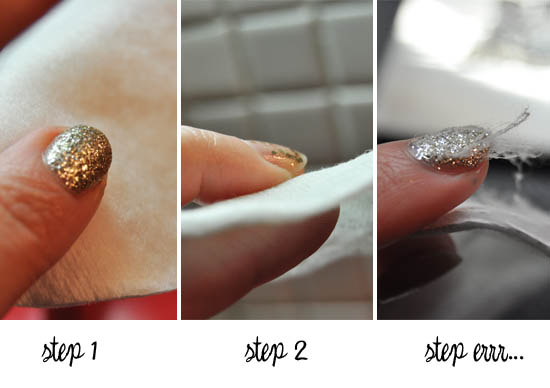 Ah, Christmas. Season of mince pies, mulled wine, presents and - best of all, as far as I'm concerned - glittery make-up.

Even if you wouldn't look skewways at a bit of shimmer throughout the rest of the year, it can be hard to resist piling on the bling during the silly season. What you don't want, though, is to wind up looking like you've been hit by the SuperGlitterFest2000 version of Homer's make-up gun, which is why your fingertips are the perfect place to wear it. Sparkly nail varnishes look gojus, as Kirstie's post earlier today showed, but all that glitter means they can be a royal pain in the hoop to remove. Here's how to get them off with a minimum of fuss.

Nail varnish removers that contain acetone, like L'Onglex in the pink bottle or Zoya Remove+, have an easier time of cutting through glitter than their acetone-free counterparts, and really are fine for occasional use on natural nails. Balls of cotton wool are inclined to shed and the bits then get stuck in the glitter, where they really can't do much to help remove the offending bling.

Cotton pads will do a far better job of holding on to nail varnish remover, so press a cotton pad soaked in nail varnish remover down onto each nail plate for 20-to-30 seconds to loosen the glitter. Only then should you swipe the cotton pad along the nail plate from base to tip, but don't use a scrubbing motion as the glitter that's come loose will act as an abrasive and scrub the nails.

Even better than cotton pads is felt, which you'll find in craft shops: not only is it going to retain that moisture without falling apart as you use it, but its textured surface will help to remove glitter in one fell swoop. Felt is usually sold in large sheets, so cut it up into small squares before use and it's best to buy white felt - nail varnish remover will leach the dye out of coloured felt.

If that's still not doing the job, press the soaked cotton pad/felt down on the nail and then wrap it in tin foil (turning the ends at the free edge of the finger back on themselves) for a couple of minutes before wiping it off.

To deal with any errant, stubborn bits of bling that might still be clinging on for dear life, turn over the cotton pad or felt square so that you've got a clean surface to work with and aren't just redistributing the glitter, and wash hands well afterwards.