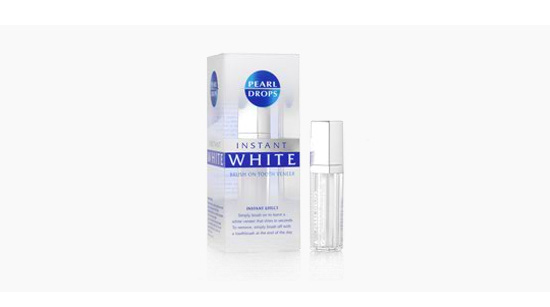 Wandering around Boots the other day looking for essential supplies like mouthwash and, er, false eyelashes, I came upon a shiny new product from the Pearl Drops peeps. Called Instant White, it's about €11 and is a brush-on yokembob that promises to instantly - albeit temporarily - whiten your teeth to give a veneer-like effect, which sounded to me like a great quick fix for a fabiliss smile.

Myself and Himself cracked a tube open on Saturday morning (sure what else would you be doing?) with varying degrees of success. It definitely made my teeth look whiter, but they're in pretty good nick anyway and there was no discernible improvement in the state of Himself's gnashers which are a couple of shades down from mine. While results were very natural, it did leave an iridescent finish which Himself was not a fan of. Not to be deterred, I lashed on two coats, making sure the sparkles were evenly distributed, and spent the day grinning like a gobshite, admiring my shiny white gnashers in every reflective surface that I happened upon.

I don't think Instant White's going to sort out teeth that are particularly stained or discoloured, despite what the blurb says about it being "like a concealer for your teeth". It may need to be reapplied after eating, but at least the applicator's pretty discreet and could nearly pass for a shimmering lipgloss.

Although I still wouldn't be whipping it out for a public touch-up...