Can this 'miracle' tummy treatment save you from going under the knife?

I have a mum-tum, a belly pooch, a tummy. Whatever your term of reference is. We all carry weight in different areas, and my lower stomach has long been my area of discontent. I've always been prone to carry weight there, but after I had my child, the area became more pronounced. It really is the one part of my body that I'm very uncomfortable with.

Over the last two years, I've lost a significant amount of weight through a healthy diet and a weights based fitness routine. However, despite some improvement, that area was still as saggy as ever. As far as I was concerned, surgery was the only option, but after having read up about tummy tucks, it just seemed too extreme for me. I resigned myself to living out the rest of my days with my pooch.

But then along came an invitation from River Medical to try out their patented treatment, Coolsculpt. It is marketed at people who want to target stubborn areas of fat on their body, namely the tummy, back and thighs. It is not, I repeat, not, a weight loss treatment. In fact, the clinic has to turn away some potential clients if they do not meet the right criteria. If you are carrying a lot of excess weight all over, then targeting one specific area will not be of any benefit. However, if like me, you're in overall reasonable shape, but have one or two areas that you just can't shift despite diet and exercise, then you are a likely candidate. 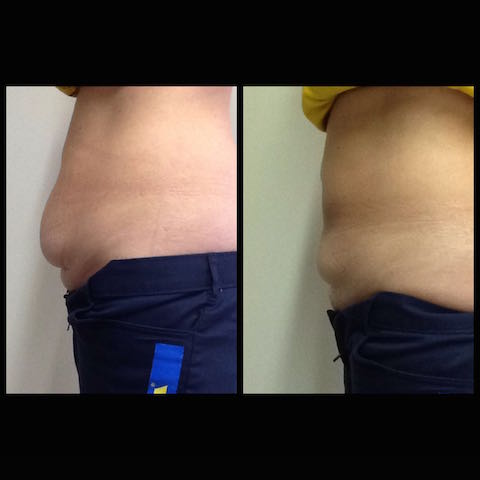 I'll be honest; I didn't have high hopes going into it. I believed that deep down the only thing that would 'fix' me was a tummy tuck and that this would just turn out to be another treatment, akin to those weight loss wraps, where they tell you you've lost inches but you can't see a darn bit of difference.

The team were lovely and talked me through everything in great detail at my consultation. They agreed that I was a good candidate and that it was likely I'd need three rounds of treatment: lower tummy, upper and finally middle. The treatments would be spread out across a few months, and I was told that it takes three months for the results to appear. They explained that while there was no down time, there may be some post treatment discomfort that varies from patient to patient, with some feeling nothing and others feeling quite significant nerve pain for a few days, but that they always have a nurse on call, and they had a post-treatment medication that they could prescribe if required.  If anything I felt that they were down playing the potential results and not 'over selling' it to me in any way. 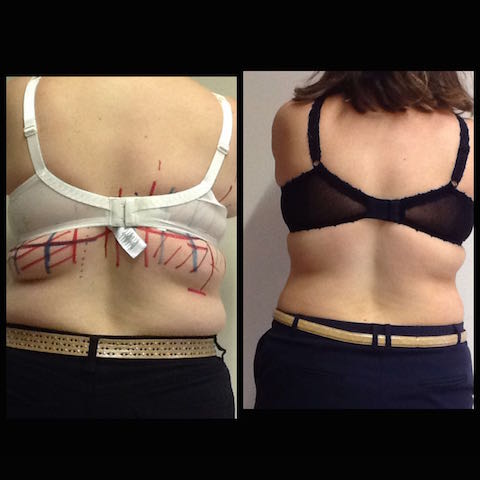 On the day of the treatment I was a little nervous as I didn't know how it would feel. Again, the team were super and put me at my ease. Once the correct area was marked up, a gel filled cloth was applied to it and then, what can best be described as a something resembling the head of a vacuum cleaner, sucked up that area of fat into it. It wasn't sore, it was just an unusual sensation and was a tiny bit uncomfortable and quite cold. Within a minute or so the area became numb and I didn't feel a thing for the hour that it remained on. In fact I had a little snooze! Once they remove the suction cup (oh, the horror!) you are left with a solid frozen block of fat that looks like a pat of butter, sticking up out of your body.  They then need to massage that for over a minute to break it back down. Again, while the sensation was odd, it wasn't sore for me. We moved to the other side of the tummy next and did another hour. That entire process was repeated for me on three separate occasions, all on different areas of my tummy, with different sized suction cups each time.

But what exactly was happening to my fat? Well, you can read about it in more detail here, but in layman's terms, they bring the fat cell temperature down so far that it kills them off. Then, over the following one to three months, the cells die and you pass them out, thus reducing the fat in those specific areas by up to 40%. Can you gain fat again afterwards? Yes, of course, but not in those areas. Those fat cells can never come back. Your body will just redistribute the weight elsewhere.

As for the potential after pain? I felt nothing more than some tenderness for a few days on the first two rounds. Think of how you feel after too many sit ups. But on the third round, I did get the nerve pain the team had flagged. It lasted about ten days and at times, yes, it was quite uncomfortable. It varied between being very itchy to very tender and it was quite swollen. However, I should say that I did not take the medication on offer to relieve it, and I believe that it is quite effective. 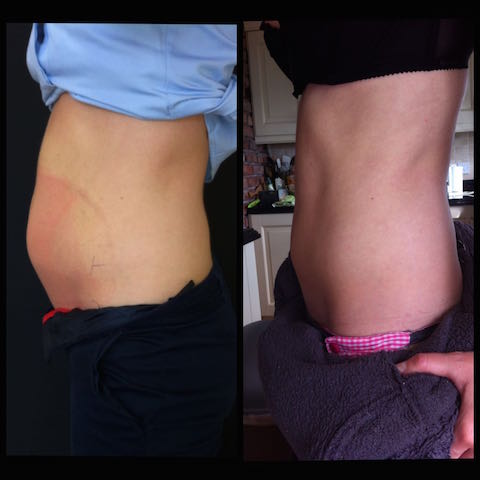 Irrespective of that, I cannot but sing the praises of this treatment to the high heavens! Ladies, it has been literally life changing for me. After one month I thought I saw a bit of an improvement but as I approached three months there was a dramatic decrease in the size of my stomach. The pooch is dramatically reduced and for the first time since I was a teenager, this summer I rocked my bikini on the beach without a trace of self-confidence. Is my stomach perfectly flat? No. I'm a 37-year-old mum. It still has contours and curves and Victoria's Secret won't be calling me any day soon to become an angel. But I have another level of confidence now. I'm wearing clothes that I would have avoided because they showed too much of 'the tummy'. I've a much better silhouette in clothing, I look better in swimwear and lingerie, I even look better in gym gear. In fact, the only negative effect was that I felt I should have done this years ago and saved myself a lot of self-criticism. Yes, there was some discomfort on the last round, but the results FAR outweighed that in my opinion. I'd be willing to go for another round tomorrow if I felt that it would further improve things.

As I said at the outset, this is not a quick fix. This is for when you've already done the work, or are already happy with your overall appearance, but just have that one or two stubborn areas that you can't shift. If like me, you were thinking that your only option may be to resort to surgery, then I'd urge you to give this a go first. Personally, I no longer have a need for the knife.  This little miracle of a machine was my saviour.