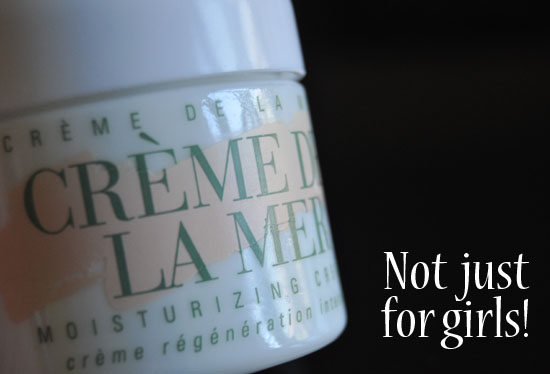 When I first tried Creme de la Mer's original moisturising creme years and years ago, I - like a lot of other burds - was completely nonplussed. Thick. Hard to use. Overloaded my skin. Expensive. Puzzling.

Except then I got a bit older, wiser, and better at reading the back of packaging. Oh, and my lovely boyfriend developed a bit of a bad case of eczema on his face; his usual product couldn't seem to cope, and everything else was just making it worse. I'd been sent a pot of Creme for World Oceans Day (of which La Mer is a big supporter), so I gave it to him to see if it'd do the job.

And it really has. I taught him - and I am gratified to see he's doing - the whole 'scoop and warm it between your palms' business. You really do need to do this to soften the product pre-application because it's so thick and balm-like in texture and it won't spread across skin properly otherwise.

It's definitely made a difference to his skin, I'm glad to say.  It's much less irritated and flaky and it's proved to be such a hit that he's now on his second pot, but the quick usage might, um, be something to do with me. On a trip away a while ago, I (HORROR OF HORRORS) forgot my own day cream and borrowed some La Mer, thinking it still wasn't the right fit for me and I'd have to suffer using it.

I bloody loved it. Turns out I'm now a perfect candidate for its rich and thick ways - and no, I'm not talking about its customer base. Ba doom tssch. Now look, I know this is a pricey product at over €100, I really do know it's out of the reach of many, but in the interests of telling you about something that has definitely worked, I thought I'd share.

And now I'll over-share some more. I like this product so much now that quite often I sidle over and nick it out of HIS bathroom cabinet.

It's my secret shame.

A note: I know this post will be met with the usual 'oh but it's just the same as Nivea Creme' grumble grumble comments. And in a way it is, because it - like many many other moisturisers - is based on an emulsion that's an oil in water mix.

But there is a little more to it than that and a few months ago I spoke to cosmetic scientist Colin Sanders  (he of colinsbeautypages.co.uk and the guy who wrote the excellent piece on parabens for us) about the rise of supercreams, and this is what he had to say:

"I think that La Mer is a good skin cream. I know from a first hand account that the active blend is made precisely according to Max Huber's [brand founder] formulation which involves several months fermenting, so it isn't a cheap cream that anyone could make.  The stories you see on the internet that it is the same as Nivea crème or whatever are not true.  Are there other creams that are just as good?  Probably."

Friday Feelings: Are High End Products Really Worth The Moolah?

If you're broke do you still splash out?