Hip Dips is a 'body positive' trend that went viral, and it finally explains why I can't call myself an hourglass (or any other 'typical' figure).

I have never, in all my years of body scrutiny, heard of the term 'hip dips' until today. Neither had I come across the term 'violin hips'. But I have them, hips that turn into thigh with a dent in between. Previously thought of as an imperfection, women with hip dips all over the globe are suddenly celebrating them, now we know that they're, eh, not a deformity.

I have always been confused about my body shape. My body is really short compared to my legs, my waist is very narrow, and I have wide shoulders and small boobs. Even though I've always been a size 6 - 8, if I had to choose any typical body shape to describe myself, because of my waist it would have to be hourglass - the most desired body shape, apparently. Except that I'm not. Rather than having that lovely curvy Dita von Teese thang, I have that unsightly indention between my hips and thigh. (So rather than being an hourglass, apparently that makes me a spoon).

#lessontime so I've always been insecure about my body type. it wasn't until recently that I discovered that "hip dips" are an actual thing. I'm not the only woman in the world with them, and women everywhere are insecure about theirs, too. hip dips are caused by bone structure and our hips sit higher. I'm not into surgery or padded underwear so my only option is to love and accept it for what it is. #hipdipappreciation #hipdips #hipdents #trochantericdepression

I wear bodycon dresses and skintight jeans because I want to - and even though I didn't look like Emily Ratajowski when she wears tight clothes, I have never been self-conscious about my wave-like shape. In truth, I didn't even though this was a thing until today. But, apparently, hip dips are a cause of concern for many people who try exercise to try to fill in the gap or buy underwear with side padding (what?) or even consider surgery. Because of this newly viral body positive spin on the matter,  I've discovered it's something that women 'learn to accept'.

In reality, it's just the way quite a lot of bodies are. Its anatomical term is a ‘trochanteric depression’, caused by the shape of your pelvis, which, if it is high, creates 'high hips' (sometimes known as shelf hips. Nice.).

Ladies, I read an article online today addressing "hip dips" or "violin hips". I seriously had no idea there was a term for this. I've had them all my life and they have always been somewhat of an insecurity of mine. Turns out your hips are just high, it's literally how the skeleton is. It is not a deformity. I reposted this article and saw so many friends of mine have the same surprised and calming reaction. It personally made me feel so much better. So let me scream it from the back - it is Normal. You are not alone. You are beautiful. ?✊??? #hipdips #PleaseDontCreepOnThisPhoto

I have never thought of my body shape as abnormal. I've always been proud that I've maintained a slim physique without having to go on diets or kill myself at the gym (thanks, genetics). But now, this 'body positive' trend that magazines are calling empowering is actually telling me to 'accept myself'. Maybe I'm lucky because I've never seen my body waves (I don't think I can quite call them curves) as something to be self-conscious about, something not to be ashamed of, something I should be 'encouraged to love.'

Should I buy some padded undies? 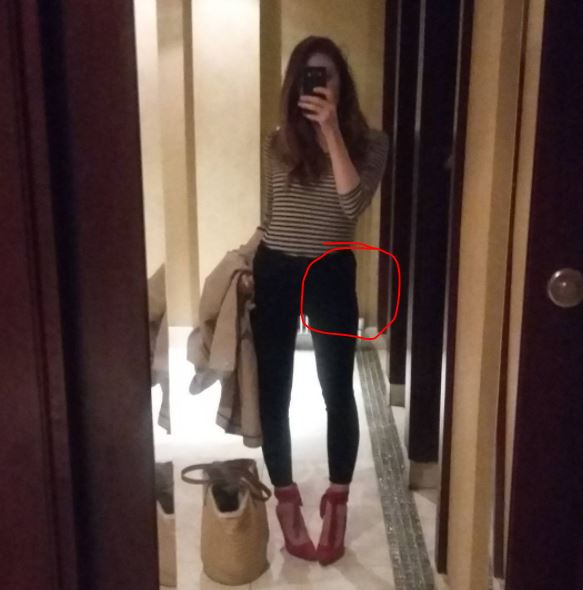 I understand why asserting that hip dips are 'perfectly normal!' comes from a good place. For me, though, it's pointing at yet another 'flaw' that women should be aware of.

Even though I'm a bit miffed, I don't want anyone else to feel like they have one more thing to obsess over. I'm certainly not. But, I'll just leave this here; a pic of the most famous hourglass figure of all time. Marilyn Monroe. Complete with hip dips.