Beauty Through the Ages: The Restoration Period 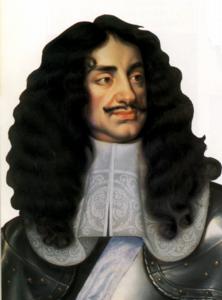 A quick history lesson first! The Restoration refers to a time in English history from 1660 onwards when Richard Cromwell (hateful Oliver's son) was deposed as Lord Protector, and the Monarchy was restored. Charles II came back from his French exile, thus ending the puritan reign that had held sway over the populace under Cromwell, and as a result, a new period of excess began.

Charles II (my favouritist monarch ever) was famed for his own personal excesses and was possibly the worlds first rake. King Charles Spaniels are named after him because he was so fond of them, and his reputation for bawdy shennanigans was unprecedented. The people loved him, and this new climate of fun, until of course, they didn't love him any more - but that's the fate of monarchs. And Bertie.

Charles II had mistress upon mistress and generally lived his life with gay old abandon. Naturally his courtiers and lords and ladies were honour bound to follow suit and set trends, and men and women were in competition to look the fanciest. Everything about fashion and personal adornment was completely different to the dour puritan clothing of the Cromwell era, and elaborate costuming, bright colours, fabulous trimmings and wigs became de rigeur.

But this was also a period of poor personal hygiene and little sanitation. Open sewers ran in what were known as kennels (gutters) on the streets, rats were everywhere and people squatted where they felt like it. We know now that this is a recipe for disease - the first thing marching armies do when they set up camp is dig latrines - and smallpox was rampant. It ravaged populations in two ways - it caused many deaths but if you survived, you were most likely to be horrifically facially scarred.

This scarring led to a new fashion, that of patches made from silk or leather, which people of fashion stuck to their faces to cover the pox scars. Patches could be bought in all sorts of shapes - hearts and diamonds were popular, and were glued to the face. This became a craze, with people seeking to out-do each other with the amount and variety of patches on their faces.

Another cosmetic method was also used, and this one was quite a bit less frivolous - people used a white powder made from lead to smooth their complexions and hide the scars. Needless to say, this wasn't remotely good for continuing good health.

Bathing was very definitely not the done thing. It was considered odd and suspicious to want to bathe more than once or twice a year because it was believed that the body's natural oils protected against disease. Combine this with the fact that clothes were rarely changed or washed, there were no deodorants as we know them, and you have a pretty big stink on your hands, not to mention up your nose. People in this period very much concentrated instead on trying to mask the stench and so scented waters were popular, as were scented pomades and nosegays of flowers, which would be held up to the nose to distract from the various stenches abounding.

One thing they did have in common with us was a preoccupation with having white teeth. However, the way they went about achieving this actually mostly led to all their teeth falling out. Preparations of acid, gunpowder and cleaning sticks made from sea coral all eroded and damaged tooth enamel and did far more harm than good. When teeth fell out it was common to create false teeth from wood, ivory and porcelain. These were wired to the teeth either side, and caused trouble for the wearers - they were uncomfortable and didn't fit properly. So a lot of people used pieces of cork and inserted them into their mouths to plump back out their faces - if you loose a lot of teeth, your cheeks will sag inwards. Needless to say, it's quite hard to talk properly with a mouth full of cork, and so a fashion for speaking with a lisp came into vogue.

Hair was a big point of fashion in this period. Elaborate curled wigs were routinely worn and Charles II himself was the owner of a long curly black number. They were made from human hair and were wildly expensive, and so were really only the province of the rich and ruling classes.

sources: englishcountrydancing.org, Restoration London: Everyday Life in the 1660s by Liza Picard, wikipedia for dates, plus facts lodged in my brain and gleaned from forgotten sources.