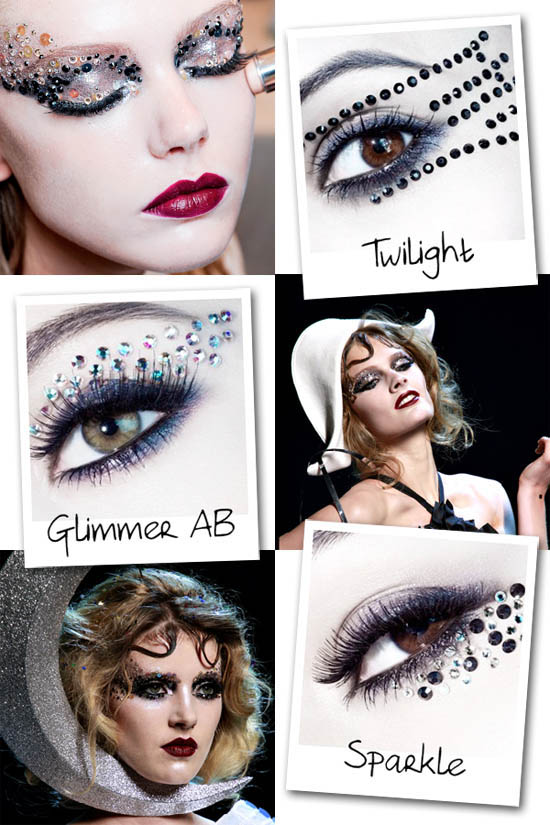 The clothes didn't rock the critics' world at July's Dior Haute Couture AW11/12 show (poor auld Bill Gaytten couldn't hold a candle to John Galliano was the consensus) but with makeup maven Pat McGrath at the beauty helm, the beauty was as stellar as ever.

Whopping slashes of saturated, graphic bright pigment marched across eyes, sequins adorned brows and there were lots and lots and lots of crystals. Lots of 'em. Many.  Then some more. And they were precisely what I thought of when I saw these new (and horribly named) Eye Rock, erm 'designer eye fashion' stick-on Swarovski crystal thingybobs from the same peeps that brought us those Nail Rock Minx-alike nail wraps.

Gaddawful names aside - and the slightly sanitised product shots the brand have used to promote the product (which ain't particularly cheap at £24 a sheet) - it did strike me that they'd come in fierce handy for a little DIY Dior should it take your fancy. See, the crystal pattern's already in place, meaning you can place and go, so that just leaves you to grunge up your eyes beforehand with some extra product. Are you thinking what I'm thinking? Chanel's Illusion D'Ombre shadows were made for this, bitches. M.A.D.E.

Whaddya think: something you'd give a go or gack altogether?