When I wander into a pharmacy to have a gander at the makeup, I do so with my face contorted into an expression of haughty suspicion. It's my 'it'll take more than that to impress ME' face. I want the cosmetics companies to know that I won't be fooled by their big claims and pretty packaging. Oh no. I want to see the product for myself.

Of course all of my 'tough consumer' attitude buggered off entirely when I happened upon this mascara. It's just fantastic. There's no other word to describe its wondrousness.

If you're looking for an understated daytime mascara, then this isn't the one for you. If, however, you're a fan of big dramatic lashes, then this affordable fellow genuinely offers everything you could ask for.

The formulation is neither too wet nor too dry, and provided you remove the excess from the bristly, conical brush, this stuff is not going to clump. The brush is narrow at one end and rather fat at the other, so it's just right to reach and fiddly little corner lashes.

I'm pretty satisfied with one coat. As you can see from the photo, one coat does a lot! It is buildable, though. Two coats of this really do create a false lash effect.

Apart from the fact that it not only volumises lashes, but lengthens them in the extreme, the clincher for me is the colour. I am enraged down to the marrow of my bones by mascara that is only sort of black. That diluted, greyish black is simply not to be borne. Miss Manga is the sort of luscious black that almost absorbs the light; a couldn't be blacker kind of black. Black as a pair of Fr. Ted's socks. Yeah. It's rather black. 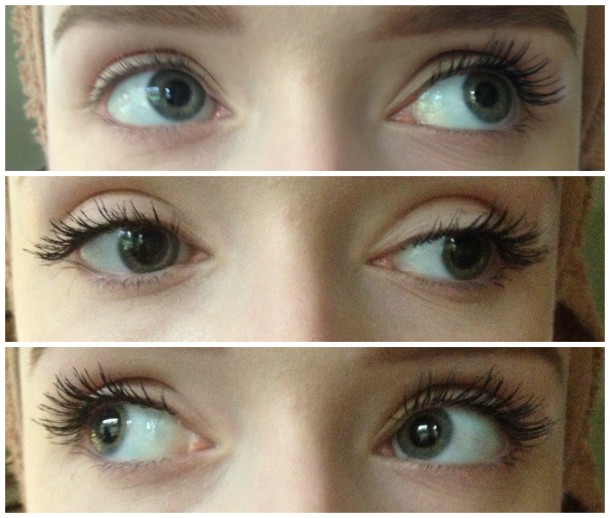 top: one coat on one eye; centre: one coat; bottom: two coats

If you're still enjoying the coloured mascara trend, then this also comes in some rather fetching purple and turquoise shades which don't compromise on the size or length.

So if you're the kind of person who feels flattered when people glance at some part of you, look aghast and whisper to their friend in awed, jealous disgust 'that's obscene', then this is a mascara that is definitely for you.

Obscene eyelashes are but a tube away.

L'Oréal Mega Volume Miss Manga Mascara is available now at €11.99. Will you be investing?