The Most Terrible Nail Bar Manicure: I paid to get this done?

So over the Christmas I was walking past a nail bar in a shopping centre and as I was going out that night I sat my (much bigger after Christmas) arse down on one of the stools and prepared to have my nails transformed.

Well they were transformed alright.  The pictures kind of speak for themselves? 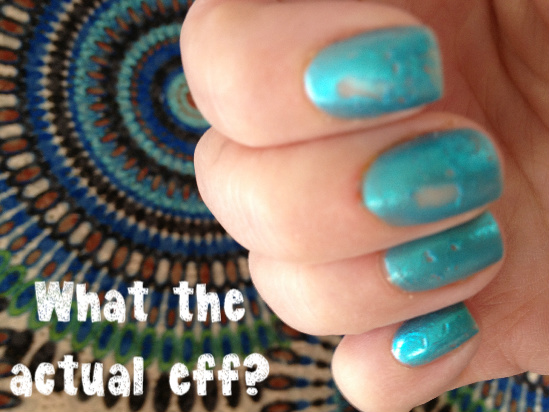 The above image shows the nails on my right hand.  I scraped the big gouges in them myself with my nails quite easily SIX hours after the manicure just to show you how soft it still was.  All the little pits and scratches you see happened themselves.

Now I've had a lot of manicures in my day so I know what I'm talking about.  This should never happen.  I was ultra careful with my nails for about an hour or so after the manicure, giving it plenty of time to dry rock hard - didn't touch anything, didn't bump off anything. 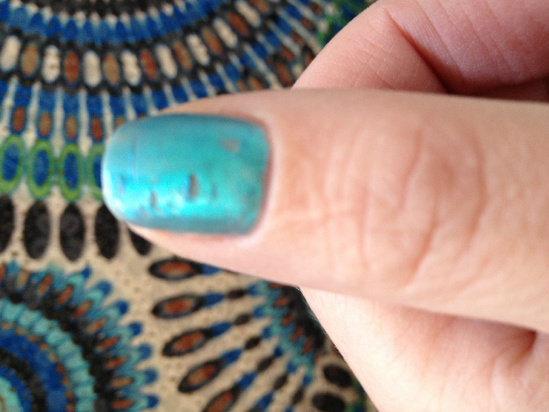 I don't know if you can see in the top picture but the girl doing the manicure actually cut the cuticle of my middle finger right down to the skin - and then painted over it thinking I wouldn't notice.  She did the same to the ring finger on the other hand.

But I did notice later - because it hurt like hell.

And it's a crap manicure quite apart from the chipping.  Look how she painted right down to the base of the nail on nearly every finger - and then had to clean up the mess with polish remover.

So your questions will be: how did the manicure refuse to dry?  And why did I allow her to do such a rubbish job in the first place?

Well in answer to the first question I think she got the topcoat and the base coat mixed up.  I specifically asked if they used quick dry top coat - "eh yeah" she said.  She wasn't paying attention, she was one of those girls who couldn't give a shit about their job or their customers and while perfectly pleasant she didn't pay attention to what she was doing. And no they weren't busy - I was the only customer.  I think she put basecoat over the top of the polish instead of topcoat.

And the second answer?  Well I was in a hurry myself, I was chatting to the person with me and I supposed as doing a manicure isn't rocket science, I kind of presumed that she would be able to do the job satisfactorily.

Will I go back and complain?  You bet your ass I will.  Twenty quid for this kind of "service" is not what I'd count as good value.

What about you- any experience of bad manicures or tales from nail bars?  Tell all in the comments!

One Week On: The Everlasting Love Manicure