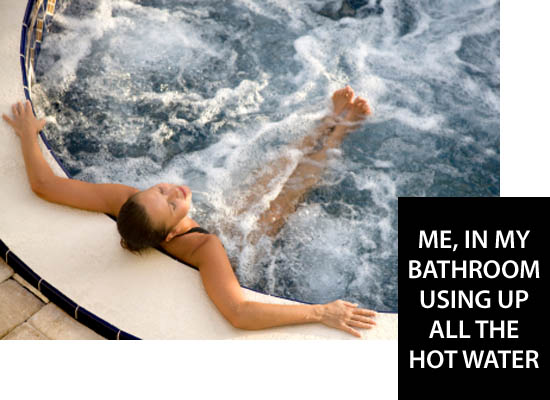 It's a source of much mystery, confusion and mirth to anyone not born and raised in Ireland but the Rules Of The Immersion are ingrained in us from birth. Men bred in this land learn at their fathers knee how to enforce the strict and strident guidelines of immersion usage, some of which can involve psychically knowing when teenage daughters are putting it on when they're not meant to be so they can wash their hair; women using it so that they can have a full bath of hot water as opposed to three inches of lukewarm and the surreptitious switching of the button up from sink to bath.

Of course, the second the ESB bill arrives all comes to naught and the screaming starts; threats to padlock the hotpress are rolled out and promises extracted from all family members to solemnly swear to never touch the settings ever again.  This usually lasts about 3.4 seconds. The Beaut.ie dad has three daughters so you can imagine how futile his attempts to keep control over his immersion were when we were all residing under his roof.

Anyway, my immersion blew up on Friday night in the middle of a particularly gripping Killing 2 marathon. As I clutched the stem of my cold glass of wine while thinking what an absolute (yet handsome) bastard Brix was, we heard a bang out in the hall. "What was that!?" himself said. "Ah nothing, probably something falling off the counter in the bathroom," I replied, adding, "oh look, Sara Lund has a new Fair Isle jumper!" and we promptly forgot about it, until one of us went to the loo and was greeted by a nice fried electric smell and a burned out immersion box.

And you know, a bit like Catholic guilt, I now have immersion-related shame. I think it's my fault: I flouted all the rules. I willy-nilly put on the boost as and when so I could have as much hot water as I damn well pleased; I came in from work and boosted that mother to boiling point so I could wash my hair; I set that baby so it would heat the water three times a day - hot glorious temperatures! - and I ran the shower for ages before I got in so it'd be all nice and steamy.

I'm Irish. I ought to be ashamed of myself.