Reality TV Confessions: I can't tear my eyes away!

Given my allergy to and complete lack of interest in shows like Made in Chelsea, TOWIE and anything that begins with "My Big Fat...", I'm sure that I've sniffily derided reality TV on more than one occasion, saying that I don't like it as a genre. Not one bit.

How and ever, it turns out that this is a great big lie, considering the rate that I gobble up episodes of America's Next Top Model and its not-quite-as-glamourous sister, Britain's Next Top Model. There's also the fact that I've lately become fascinated by two particular categories of reality shows, which I have decided to name "Mystery Box" shows and "Show me the most AMAZING thing you own" shows.

Allow me to explain. 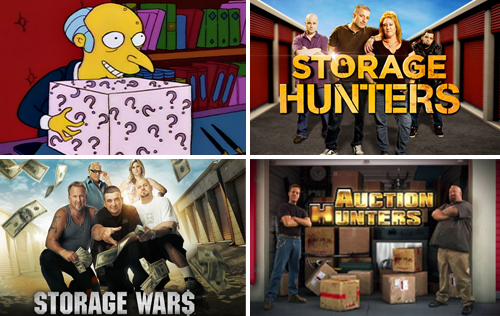 MYSTERY BOX SHOWS
In this category are shows such as Storage Wars, Storage Hunters and Auction Hunters. The show's producers may not be the most imaginative of people when it comes to names (any day now a show called Auction Wars will be commissioned, just to complete the loop) and all three are about the exact same thing. Each show follows different sets of people attending auctions where the contents of abandoned storage units are sold off to the highest bidder as a single lot. The unit gets opened up and the buyers have five minutes to figure out whether the unit is worth bidding on, without touching anything, opening anything or going inside the unit. See, it's exciting! It's a giant MYSTERY BOX! Some of the stuff that's been discovered on these shows includes a vintage Coca Cola vending machine, 17th century guns, rare baseball cards and even a unit filled with newspapers, which turned out to be worth $60,000 to $90,000 as they were all from the week Elvis died and sure people go mad for that kind of thing.

Utter dickheads
The only problem with most of these shows is that the recurring stars, who are mostly male professional buyers, are by and large, utter dickheads. A married couple are the focus of Storage Hunters and another couple feature heavily in Storage Wars and in both cases, the wives are portrayed like humourless, nagging harpies, the husbands are dismissive, sexist geebags and both couples are generally just awful to each other. After surmising that the cast of both of those shows are about as appealing as a pint of bin juice, I've traded up to Auction Hunters, where the finds are still great and the two buyers at the centre of the series are actually likeable and funny dudes that I don't want to scream at. 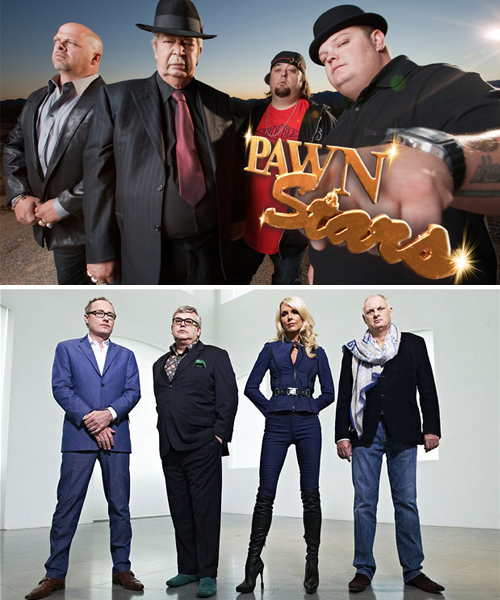 "SHOW ME THE MOST AMAZING THING YOU OWN" SHOWS
These shows take the hassle out of having to root around cluttered storage units and people's house and goes right to the good stuff. Pawn Stars is compulsive viewing, as the family-run Las Vegas pawn shop that it's set in sees all manner of amazing stuff brought in to be sold by the owners.

There's been an Evel Knievel pinball machine, a 1715 Spanish fleet gold coin, a Superbowl ring and a Picasso, among tons of other brilliant bits and pieces. Also, the three generations that run the shop, "The Old Man", his son Rick and Rick's son Corey are so much fun to watch, they seem like they'd be great craic and Rick's laugh is the most contagious thing ever.

Stupid scarf
The other show in this category is Four Rooms on Channel 4, in which people who believe they have an extraordinary or valuable object get the chance to sell it to one of four top dealers. Each dealer is in their own room, so a seller can enter the four dealer's rooms in any order they choose but if they turn down an offer they can't go back to that room. People have brought in stuff like the chair that JK Rowling sat in while she wrote the first two Harry Potter books, an antique dildo, a rare early Beatles poster and a Marilyn Monroe self portrait. There's only a slight speedbump with this show, which is buyer Jeff Salmon. He's an obnoxious, posturing, rude git and I hate his face and his stupid scarf. To a much lesser extent I also find the new lady buyer, Celia Sawyer (who replaced lovely, weird Emma Hawkins) a bit annoying, as she seems to think she's Catwoman for somereason.

So those are my reality TV confessions. What are yours?