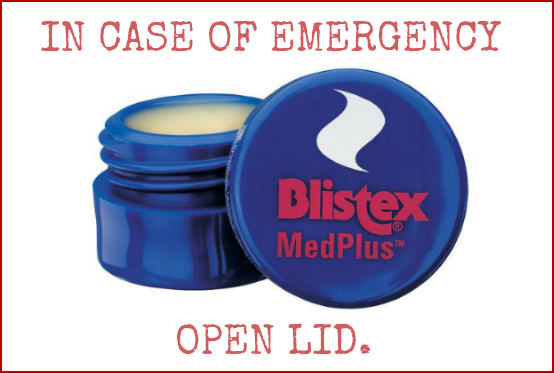 You know when your lips get past merely being dry, chapped, or a bit flaky and progress to that awful stage where they're shredded, peeling, raw, cracked, and sore? When they feel like they'll never be right again and your normal lip unctions seem capable of offering only the tiniest smidge of short-lived relief?

Well, that's the state mine arrived at one evening last week, only I couldn't find any of my usual old reliable salves to offer them even a modicum of help (we've just moved and, honestly, I feel like I may never be able to find anything ever again.) Much to my shame, it was only when Himself caught me absentmindedly sloughing off what felt like an inch of lip flakes with a nail that I thought I'd better do something more than thinking “God, my lips are in bits” to sort them out.

Digging through boxes and bags eventually unearthed a tube of Lanolips 101 Ointment, but I might as well have been applying thin air to my lips for all the difference it made to their condition.

It didn't take me long to remember why Lanolips had ended up in my rejects drawer; how it's come to be a cult favourite is beyond me.

Another rifle through another stack of boxes later, I was rewarded with a rather more promising looking tub. I'm a long-time fan of Blistex Daily Conditioner for a budget lip fix (it's one of my AWOL staples) and I was hopeful that the Blistex MedPlus I'd come across would be similarly brilliant. Its no-nonsense blue casing isn't the prettiest I've ever seen, but sure so what: it looked like it meant business which was much more important to my poor lips than any dressing table appeal.

The smell of menthol and camphor hit me as soon as I took off the lid and while I was a bit worried that they might cause further irritation to my cracked puss, it was a case of either taking a chance on this balm or organising a lip transplant stat.

As it turned out, I needn't have worried. Immediately on application everything felt soothed and softened, and rubbing my lips together no longer felt like pushing two pieces of coarse grit sandpaper against one another. Then I promptly forgot about them for hours, which was miraculous considering the awful state they had been in, they haven't regressed in the slightest, and I've been able to use a lip scrub to gently get rid of dead flakies without any soreness (which is probably preferable, if a bit less convenient, than using a thumbnail.)

I've subsequently noticed that Blistex MedPlus Lip Balm seems to sold out in a lot of pharmacies, which I'm hoping is a sign that I'm just late to the party in discovering its efficacy rather than that it's being discontinued! If you happen to spot a tub, I'd definitely recommend snapping it up – and maybe you could grab a spare for me, too?

Blistex Lip Relief really is the best thing for winter

'Tis The Season: Four Beauty Products To Take You From 'Flu To Fabulous