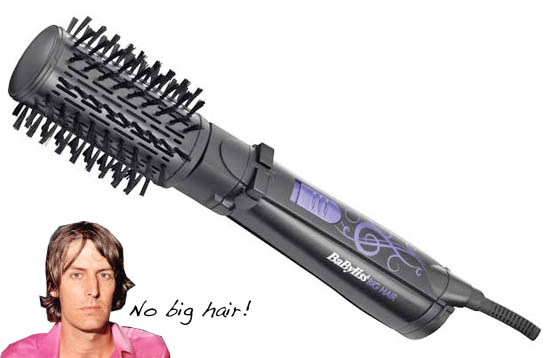 Every year, my mam and sister insist on me making a list of things I might like to receive as presents for Christmas and my birthday, which follows shortly afterwards. I'm difficult to buy for, they moan. Suggestions of gift vouchers or getting a beehive for a family in Africa are met with exasperated cries of "oh for God's sake, we just want to get you some little thing to open on Christmas morning! Something for yourself!"

Things that feature on this year's list are make-up staples like Bobbi Brown Creamy Concealer and loads of bukes, but I'm thinking of asking for a contribution towards a Babyliss Big Hair styler. It's a motorised rotating barrel brush to be used on slightly damp, almost dry hair to create volume at the roots and movement through the ends, and I'd fecking love to have a go of it.

A couple of weeks ago, I watched a promotional video of it in use and spent the entire duration of the clip convinced that your woman who was demonstrating it would end up having to get it cut out of her hair because it'd become so entangled. I happened to speak to a girl who owns (and loves) one over the weekend, and she assured me that the bristles are so soft that there's no way it'd get knotted in hair.

With that worrying concern allayed, I think it looks absolutely deadly buzz!

Why this hairdryer is our new holiday companion

Coming soon to a Wish List near you: Babyliss PRO Perfect Curl

In praise of the Babyliss Big Hair: Bad Hair Life made immeasurably better