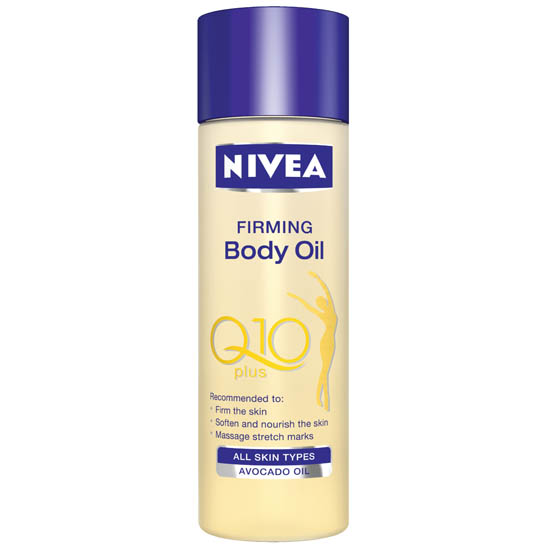 This arrived recently for testing and it immediately piqued my interest. I'm pretty lax with body moisturisation at the best of times but if I am going to force myself to hydrate my hide, an oil will be the best way to get me to do it. A dry oil's better, obviously as it's non-greasy and absorbs quicker, and a quick scan of the packaging and blurb for Nivea's new Firming Body Oil with Q10 Plus, €9.99 for 200ml, got me even more interested.

Why? Cos I think Nivea is jockeying itself right up onto the shelf beside Bio Oil, and I think they want to race right ahead of it too. You know, it might just do it as well. It's important to note that this isn't a pure botanical oil if that's what you're looking for: essentially, both products contain mineral oil as their main ingredient and then lesser quantities of botanicals and actives.

For example, Bio Oil boasts retinyl palmitate, a vitamin A derivative, which is one of the only real anti-agers any dermatologist or skin scientist will swear actually works. It's a less effective, cheaper form of the retinol ingredient we hear so much of in skincare, and it comes a bit down the ingredients list; but as a result Bio Oil has a proven track record with scars and stretch marks and has lots of studies to back up its claims.

Nivea's not making a scar or stretch mark claim with Firming Body Oil, though it does have the words 'Recommended to massage stretch marks' on the packaging - which is essentially meaningless. It just means you can surely use it in pregnancy on your bump, but they're not promising anything. What they are claiming is a skin firming effect in two weeks. Nivea's extra ingredients include Q10 (already used in its facial moisturisers) and avocado oil, which is a nicely moisturising ingredient.

The scent is pleasant - it's a little artificial but grand - plus crucially it passes the all-important Tights Test. You can apply, it sinks in straight away because it's got a light, dry formulation, and there's no sweaty wrangling as you heave yourself into your opaques. So that pleased me too.  Skin does feel softer and more smooth, but as for the firming effect, the jury's still out.

As it's on shelves in supermarkets now, anyone else tried it yet?

3 useless beauty products you shouldn't waste your money on

Cult Beauty: 5 Products That are Over 100 Years In the Biz

Our kind of history lesson

What do you use when your lips are the focus?

We check out three serums, from bargain to blow all the budget (all of it)