If you're a makeup enthusiast, it can be hard to choose a favourite product. When it comes to eyeshadow, though, I have a hands down favourite, and have had for years.

Every once in a while, you encounter a product that's just special. For me, that's Mac Blue Brown pigment. It's one of the most visually interesting products I've encountered. Though it is basically a duochrome powder which is brown, but glossy metallic blue in the light, it looks like a different eyeshadow depending on what you do with it. Blend it and it will go almost red. Apply it over a black cream shadow base, and it will adopt an astonishing level of intensity, looking almost wet. Here it is on the eye in our iridescent jewel eye tutorial.

Frankly, I've had the same pot for years, so I don't resent the €24.50 price tag for this weird, glorious stuff, but if you're looking for a dupe, we've found one for you. 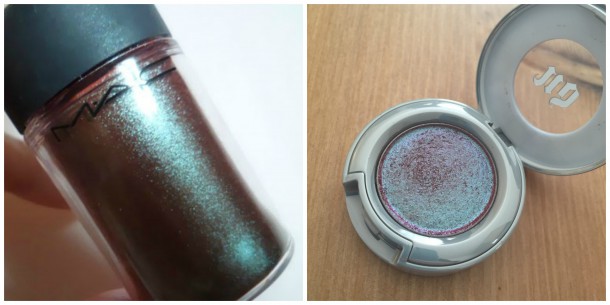 There are cheaper dupes for this shadow, but none of them mimic the intensity and gloss of Blue Brown except this one, so though it is cheaper, it still isn't cheap at €18.50. It is an easier version to use, though. Mac loose pigments can be very messy.

This version - Solstice from Urban Decay - is a pressed powder with all of the same intensity and gloss, but without the mess and at €6 less! 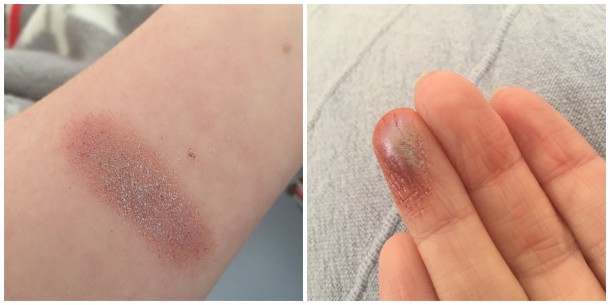 As always with duping, the match isn't completely exact - the pigment in the Urban Decay shadow (left) packs less tightly onto the skin, leaving a finish that looks slightly more glittery than the Mac (right). That said, the shade match is pretty much perfect, and the effect is the same. While loose pigments aren't ideal for travel or easy application, Solstice goes on like a dream and doesn't ruin the carpet if you drop it!

Are you a Blue Brown fan? Is there a product you'd love a dupe for? Let us know in the comments and we'll go in search for you.