Is this future mother-in-law's outfit the worst possible choice for a wedding?

Wedding guest outfits are surprisingly hard to organise. You can't buy a dress from Coast because the bridesmaids might be wearing it, and to be honest, getting a dress from any other High Street shop is risky. The internet nearly had a breakdown over whether this dress was wedding appropriate of not, and while there are some brides who wouldn't give a shoot what colour their guests wore, others would have a conniption if someone wore even a glimpse of white.

There's something about this particular outfit that has me on the side of the bride. Natalie204 wrote on Mumsnet  that her future mother-in-law showed her a pic of the "beautiful floor length white evening dress and white jacket" she is planning on wearing to the wedding, and she didn't know what to do!

Natalie is being a lot nicer about it than we would be.

A regional thing? Like, does she mean if it's ok on Mars or something?

She got 363 responses, and opinion was divided. 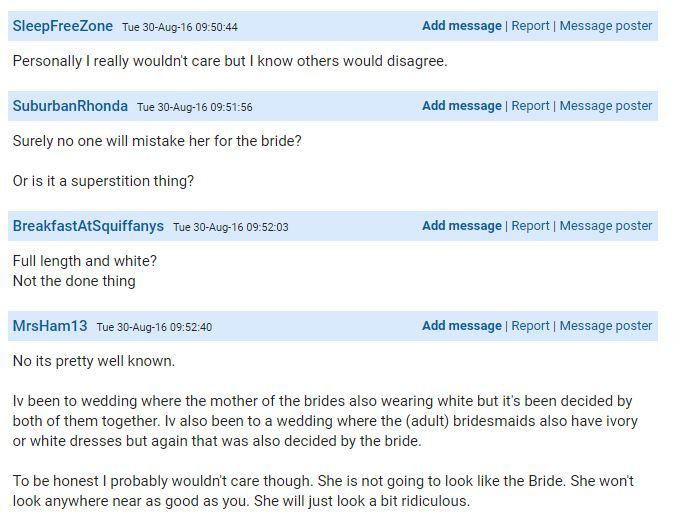 OK, I get the point that no one will mistake her for the bride, butI just don't understand why anyone would wear a floor length white gown when they know the bride will be. Like, why would you want to turn up at the same event in the same outfit as someone else? Except if you're a bridesmaid (and even then...). 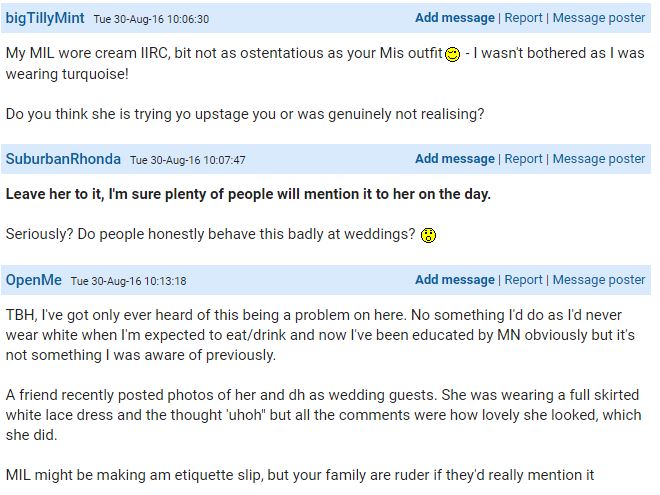 Let the debate begin! Is this kind of behavior rude, or not a big deal?

What should you be paying for wedding hair and makeup?

5 dresses under €50 to wear to your next wedding

Would you wear this €30 dress to a wedding?

The best facials for the week before your wedding